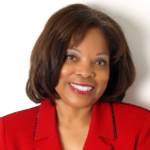 “Leaders need followers, so this honor acknowledges not only me, but also volunteers, partners and donors who provide nutritious food to over 10,000 seniors and veterans annually.”

No stranger to challenges, Diana Gregory was raised in the Pruitt-Igoe housing projects in St. Louis, Mo. Her parents taught her that it is not where you live but what lives in you that determines your destiny; that the purpose of life is a life of purpose; that education was her path to the future; and that she should live by an attitude of gratitude. She graduated as valedictorian of her high school, winning a scholarship to and graduating from Boston University.

Gregory started her career with Anheuser-Busch in 1978, when it was uncommon for women to have careers in the beer/alcohol industry. After a successful 30-year

corporate marketing and sales career with them, Gregory placed her attitude of gratitude alongside her expertise to raise social awareness and bring long-term, meaningful change to needy lives in her community.

And she has done just that. An innovative and creative visionary, Gregory founded the Diana Gregory Outreach Services Foundation and Gregory’s Fresh Market, a 501(c)(3) division of the organization, in 2009, the year following her “retirement.”

GFM serves Greater Phoenix seniors as one of only a handful of companies to deliver fresh fruits and vegetables directly to senior independent- and affordable-living complexes, making it easy for seniors to receive free produce. GFM includes education to increase senior awareness about and understanding of healthy food choices.

Among Gregory’s many guiding principles is persistence and never giving up on a dream.

When starting Diana Gregory Outreach Services and Gregory’s Fresh Market, Gregory needed a produce supplier. During her career with Anheuser-Busch, she had learned a great deal about making cold calls. Obtaining a list of produce suppliers in Phoenix, she visited six suppliers to present her mission and ask if they would support the organization with affordable pricing to bring a farmers’ market program to underserved seniors. Five out of the six companies passed on the opportunity. But on the sixth visit to Peddler’s Son Produce, the owner, Ted Palmisano, responded, “I want to be a part of this.” He was the first partner and, 12 years later, Peddler’s Son Produce remains a partner.

Throughout her corporate career and 18 years as a Phoenix resident, Gregory has served on boards that advocate for minority opportunities and women. Among her current commitments are Desert Botanical Garden Board of Trustees, member of International Women’s Forum Arizona, member of the African American Women’s Giving and Empowerment Circle, founding member of the Phoenix Metropolitan Chapter of the Coalition of 100 Black Women, Inc., and member of Archer-Ragsdale Arizona Chapter Tuskegee Airmen, Inc.

Her tireless work for seniors and veterans has also been acknowledged by many awards. Besides her parents, Gregory was also inspired by her late uncle, the comedian and activist Dick Gregory, that the secret to being happy is doing things for other people. Gregory has certainly taken his inspiration to heart. Under her leadership, GFM continues to widen its circle of compassion and inclusion in the State of Arizona.