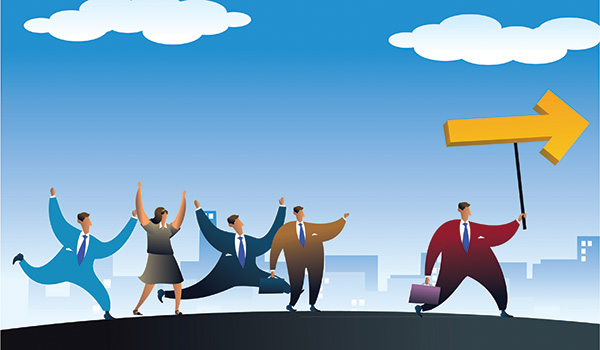 Winning businesses follow the championship formula: People + Personality + Process + Purpose = Dynasty. People, naturally, are the first element needed to be in place in order to build a business with sustainable success. It is the people at the top — plus their personality traits along with processes and their purpose in life — who provide a more complete answer to identifying companies and teams that are successful over time and reaching dynasty status. The championship formula model identifies three core leadership staff and a group of followers: a thinker (idea person), a promoter (marketer and communicator), a coordinator (day-to-day manager) and a corps of action-oriented staff (support staff).

Thinker. This is the brains behind a team who comes up with cutting-edge innovation that propels and maintains the group’s success — Steve Jobs with Apple or Tex Winter and the Triangle Offense with the Bulls and Lakers. They are brilliant people who can conceptualize and apply their vision with incredibly successful outcomes. In the corporate world, professional sports and collegiate sports, the thinker is typically embedded in the roles of board chairman, star player, and chancellor or president, respectively.

Promoter. This is the person who promotes, sells or markets the team or company and the person the public most readily associates with it: Jack Welch, GE; Warren Buffett, Berkshire Hathaway; Payton Manning, the Colts; or Jeff Gordon and Dale Earnhardt Jr., NASCAR. In the corporate world, professional sports and collegiate sports, the coordinator is typically represented by the CEO, general manager or owner, and athletic director, respectfully.

Coordinator. This is the day-to-day coordinator who is responsible for running an organization. This is often the COO or the general manager of a team such as the brilliant GM of the Colts, Bill Polian. Most often, the qualities of a coordinator are embedded in the role of a COO in the corporate setting, and head coach in professional and college sports.

Action-Oriented Staff. These are the key chief executive officers, board members, division heads, assistant coaches or administrative staffers who carry out daily functions that ensure the ongoing success of the organization.

Influencer. Of the three types of leader, there is always an influencer. This is a person who has a major impact on the life of the key leader of a team — the person most identified as a primary leader. The influencer impacts the culture, thinking and behavior of the leader, whether he or she is in the role of thinker, promoter or coordinator. Influencers are mentors who may be a parent, coach, teacher or boss — anyone who helped shape the head coach or CEO.

It is important to note that these roles are not always locked in for all time. As brilliant thinkers build a large talent base at the top, they can switch to promoting the organization — and become the face that people identify with as representing the organization. For example, Warren Buffett was able to move into the promoter role, with Charlie Monger and, previously, David Sokol helping with the thinker duties. That said, there needs to be great flexibility in this shifting, with contributions clearly spelled out for long-term success.

All three leadership styles are needed at the top in an organization. Perhaps this is why so many leaders now fail or last at the top for only three to five years — they don’t surround themselves with the other styles. We are in a period when we have an abundance of charismatic leaders who lack deeper substance and bounce from one rousing speech to the next. They are a mile wide and an inch deep. It can catch up to this type of leader during the first crisis. Studying the people who mentored and shaped a leader will teach a great deal about the essence of a championship leader.

Jack Stark, Ph.D., author of The Championship Formula, maintains a practice as a licensed clinical psychologist and provides psychological and performance enhancement training to elite athletes at the collegiate, professional and Olympic levels. He is the founder and director of Performance Enhancement Group, regularly consults to Fortune 500 executives and has made more than 1,000 presentations on leadership and teamwork.