Valley of the Sun United Way 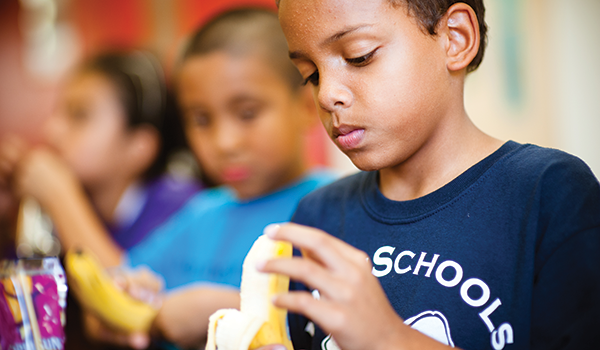 With a couple of name changes since its founding, the community organization has been serving Phoenix since 1925. In the ’80s, the then-Phoenix/Scottsdale United Way was joined by other Valley United Ways to form the Valley of the Sun United Way.

The organization’s goals now, as then, are to ensure children and youth succeed in school, to end hunger and homelessness, and to help individuals and families achieve financial stability. But now, especially, “is an interesting time to talk about United Way,” says VSUW executive director Merl Waschler. “We’re on an inflection point now of doing things differently.

“Today, we identify strategies and metrics — what we want to achieve in those areas — and set specific goals in each particular area,” Waschler says, noting it is a significant change in the organization’s approach. Historically, United Way has invested its funds in high-performing programs across a wide service spectrum. But a few years ago, Waschler says, “We stepped back and had conversations with supporters and business leaders around what our aspirations are.” The result was a decision to narrow those community aspirations and invest the money in a more concentrated manner.

Addressing homelessness, for instance, VSUW previously was a primary funder for those who work with the homeless community. Now, instead of just managing the issue, VSUW looks at the underlying issues of homelessness. “If we can get the chronically homeless into housing, we can free up money for families that are first-timers,” he explains, noting that the chronically homeless make up less than 20 percent of the population but consume 50 percent of the resources. “We make a systemic change and, at the same time, improve people’s lives.”

The systemic change involves creating an advisory council for the issue made up of people who touch that issue. In the case of homelessness, this includes government, business, architects and builders. The council works to build a common vision and agenda, studying programs that have proven successful in other cities and seeking input from local and national experts as technical advisors. “We figure out how to take what they’re doing and translate it locally; we can’t just import it.” For instance, he says, “The work of the Corporation for Supportive Housing in Philadelphia and Seattle was influential on the work we did here.” This involved recognizing a need to establish the infrastructure to support the end goals of providing housing.

Existing advisory councils are End Hunger, End Homelessness, Ensure Children Succeed, Ensure Youth Succeed, and Increase Financial Stability for Families and Individuals. Helping in these efforts is the caliber of the business leaders involved in VSUW. Recent board chairmen are Phil Francis, former CEO of PetSmart; Doug Parker, CEO of US Airways; and Derrick Hall, CEO of the Arizona Diamondbacks. Pam Convoy, CEO of Wells Fargo for Arizona and Nevada, is the current chairman. Says Waschler, “Getting a business leader at the table, people want to be at that table.”

Connected to all of this is a new focus for the organization. “We need to make sure people at all levels of government know we have a set of strategies and a lot of information around these issues they’re making decisions on, and that we have an expertise and interest in policy that affects those populations — so we are one of their first calls,” says Waschler.

The organization’s purpose is to identify issues and how they tie into other “wickedly complex issues,” and provide data that will help decision makers make good decisions. “We’re a leading indicator regarding social issues,” says Waschler. “For instance, we work with 2-1-1, a community referral service, so we really know what’s happening on the ground.”