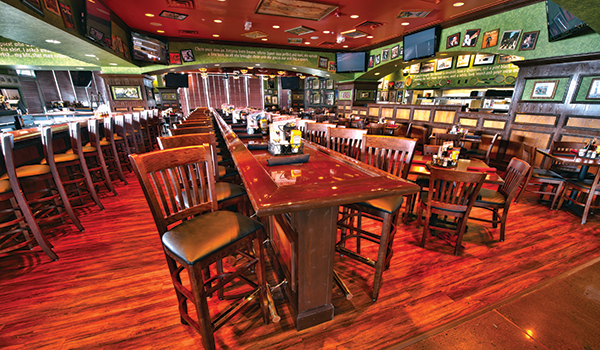 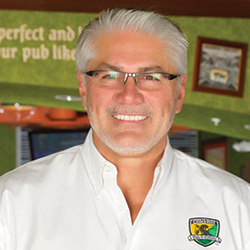 Restaurant dining can be as much about the entertainment value as it is about breaking bread. This is where Ron Lynch put the emphasis as he developed the Tempe-based Tilted Kilt Operating Franchise, LLC, of which he is president. The Tilted Kilt is a Celtic-themed sports bar and restaurant chain known for its scantily-clad female servers in kilts — all against a backdrop of a fun and entertaining atmosphere.

“The entertainment value is to have a very strongly Celtic theme, interesting oddities covering the walls that fit that theme, funny Irish limericks in highly visible places, dark rich woods that portray class while giving the feel of the old-world Pub (Public House), sexy servers and bartenders making a connection with each and every guest,” Lynch says, summing up the franchise’s business plan.

While Lynch is the face behind the brand, he is not the pioneer. The concept, originating in 2003 in Las Vegas, was the brainchild of successful restaurateur Mark DiMartino. His vision is what customers have come to know as the Tilted Kilt brand — theme-driven costumes in a fun atmosphere. The restaurant enjoyed great success in the Sin City market, and it was not long before it caught Lynch’s eye.

Lynch entered into several months of discussion, confirming that the Tilted Kilt had broad, far-reaching appeal and had what it takes to make it in multiple markets. It was then the franchise was hatched, and the headquarters moved to Tempe. Explains Lynch, “The original pub was an evening business deriving their business from the casino traffic. We converted the concept to a full-scale restaurant with lunch, happy hour, dinner and late evening parts.”

In a time when many casual dining franchises are closing locations, the company is in growth mode. The Tilted Kilt Operating Franchise, LLC has what Lynch calls “a big footprint,” with about 70 locations scattered throughout the United States and Canada. According to Lynch, the company is on track to open more than 25 additional locations by the end of 2012. And the size of the workforce is equally as impressive. “At any one time, we have approximately 4,000 employees employed in the Tilted Kilt system,” says Lynch.

The company’s success has garnered it national attention. Through Lynch’s leadership the franchise has racked up an impressive record of awards, including being named last year to the Inc. 500 list of the fastest-growing privately held companies in America.

How is all of this possible in a down economy? “It’s all about people. I think we’re doing a good job of attracting quality people,” he shares.

Lynch attributes the company’s success to two factors: structure and branding. A two-tiered system is designed to most effectively penetrate the respective market. An area developer is charged with rallying support for the franchise and has a familiarity with the local real estate. The second level is the franchisee, who owns and operates the store — following universal branding standards determined by Lynch and his team to ensure consistency for the customer.

While the name Tilted Kilt Pub & Eatery, type of costumes and décor were already in place in the original pub concept, Lynch had a hand in expanding the brand. “Among many things, I had our own costume fabric woven, our tartan material fabric registered on the International tartan registry and new patterns made, manuals, procedures, standards put in place for operations, marketing, administrative, et cetera.”

The Tilted Kilt brand is fueled by Lynch’s commitment to “The Code of the Clan Tilted Kilt,” by which he expects every person at every level of the organization to operate. The code embodies the values of pride, integrity, respect, strong work ethic and fun. Lynch says these values were defined early on by DiMartino, and are what keep the customer coming back for more.

With the backdrop of traditional pub décor and modern atmospherics, the eatery still channels its Celtic namesake. Think oddities like kilts hung on the wall and faux painting to create an old, weathered look. Only 10 percent of the décor is allowed to be locally sourced, so as to maintain the authentic feel. And the fare pays homage to the old public houses of America, England, Scotland and Ireland, serving up a mix of traditional pub food like Fish & Chips and Shepherd’s Pie. Beers from around the world are also available. As Lynch explains, “We strive to make it so that immediately you recognize that old-world flavor. We want to be the modern-day pub.”

Success, according to Lynch, lies in the company’s quality leadership. “I think we’re doing a good job of attracting quality people,” he says. It’s a point of difference that has kept the franchise strong even in a weak market. In fact, Lynch believes recent hard times have proven to be doubly an asset. First, the company has had increased access to some “prime real estate” for new locations. Second, the franchise gained many attractive candidates among otherwise displaced workers or those simply looking for a career change.

“Our [concept] is about the entertainment value. If we keep the fun in it, we’ll keep growing,” Lynch says. And he emphasizes that it’s all about being genuine to one’s brand. “Understand what the purpose of your business is. At the Tilted Kilt, our purpose for being in business is the entertainment business, as opposed to Taco Bell’s purpose, [which] is convenience. Also, differentiate yourself in the market.”