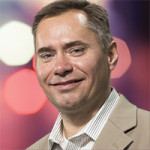 “Any vehicle that has a phone number on it is potentially valuable to a company like ours,” says Rob Donat, founder and CEO of fleet tracking company GPS Insight, which provides sophisticated tracking solutions that help companies with fleets add value to their operation — more efficient dispatch and routing being one of many advantages.

When he moved to Scottsdale from Chicago in 2004, he took a new direction with his experience in using technology in the financial industry, applying it to consult for a trucking company looking for a program to track its trucks. “I discovered there were not many products adaptable to the company’s requirements in payroll and billing needs,” he recalls.

The project opened his eyes to a market that seemed to promise great potential, as he noted the number of service and delivery trucks on the road. But the impetus to create his own product to offer his customers was the realization that what he was doing as a consultant was selling someone else’s product and then putting in a lot of work to augment it for a client’s specific needs.

Now, the company owns every piece of the value chain, except the hardware, in proprietary systems it developed to communicate with the GPS tracking systems in the field and process about 30 million pieces of vehicle data per day — and make that data available to the customer in real time as well as on GPS Insight’s scheduled reporting day. Customers see immediate, significant ROI that averages 400 percent, and some hit 1000 percent, according to Donat.

One aspect Donat enjoys, and he feels helps him attract and retain talent, is “the constant learning process that makes it interesting to go to work.” Serving the needs of customers requires, first, understanding that customer’s business. And, he says, “they have interesting businesses.”

Part of the learning comes from working with the customers and really listening to them. Also valuable are trade shows. “Anybody who has vehicles has an industry — and has an industry association we like to get in front of, to get to know more, understand their requirements and needs, and how we can help,” he shares.

His is a market that continues to evolve, he says, and he believes the tracking industry currently has only about 40-percent penetration. And he has seen what he calls “a race to the bottom” as the quality of global positioning system products has gotten better and less expensive. “I saw customers jump to these low-cost products,” he relates, “but realized they gave up a lot of ROI.”

Making no concession on quality (“I’m happy that our product is the quality it is,” Donat says), GPS Insight did launch a less capable signal-type version to combat the price depression. Comparing it to training wheels, Donat explains it allows customers to get started with a product, and there is the potential to upgrade them when they find they want additional capabilities.

Donat started the company with two employees who had been consultants for him on other projects, and grew his workforce by referrals. He has found a rich pool of talent in the Valley — new graduates from ASU and U of A, and others who, he says, “move from other cities for the laid-back lifestyle.” And he has learned to “hire for the people,” he says, explaining, “We made the mistake in the past of letting people stay on who were good but not a culture fit. That did more damage than good.”

The company has been a winner two years in a row of the Phoenix Business Journal’s Best Places to Work, and Donat believes part of that comes from hosting several company outings to sporting and cultural events. “It’s a nice, bonding atmosphere — off-site and non-work — where people can get to know each other,” he says. But at the core, the reason people enjoy working for GPS, he says, is “every day is going to be something non-routine and non-mundane” because every customer is different. “They’re helping customers with a fun product that’s fun to build and fun to sell.”

The company will be coming to market with a new monitoring solution it has developed with three other companies, “so if a driver is pulled over for any reason, he can prove he’s within the law in terms of how long he’s been driving, how long he’s rested, and how long he’s been on duty,” Donat explains. One company provided expertise in DOT driver laws, another the hardware, and “we’re working with Magellan, which does navigation, so we can give drivers turn-by-turn directions” that can, for instance, let a driver know if his truck will fit under a particular bridge.

GPS Insight typically offers the DOT-compliant monitoring solution for a mixed fleet that is primarily local, he says, pointing out his company can save more money for a local delivery fleet than  long-haulers, as the former is more  dispatch-oriented.