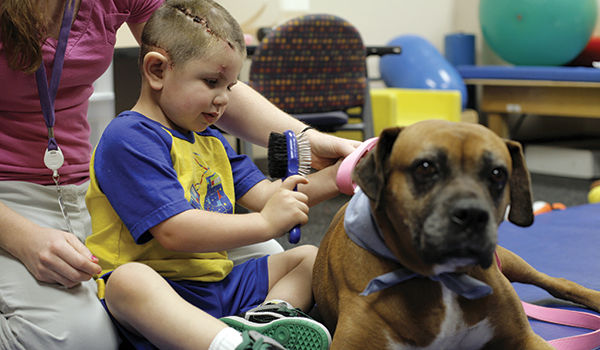 To support the animal-assisted therapy program for its pediatric patients (newly rebranded as PetSmart Paws Can Heal), Phoenix Children’s Hospital presents its sixth annual Dine with Your Dog fundraiser on Saturday afternoon, 4 – 7 p.m., on April 13 at the PERA Club in Tempe. The event showcases how integral animals are in the healing process, explains Denise Wittstock, manager of volunteer services and animal-assisted therapy. Both current supporters and animal lovers who may not have previously been aware of it “become more familiar with the successes of the program,” she says. “Through interaction with the animals and volunteers and speakers, they’ll share the progresses and the depth of the physical and emotional benefits.”

Attire is casual, but guests are encouraged to dress up their dogs. In addition to a gourmet dinner — for the animals as well as their humans — there will be a fashion show of canine couture as well as activities and demonstrations that will allow attendees to interact with the therapy animals and “expose people to the additional ways animals are making a difference in healthcare,” says Wittstock.