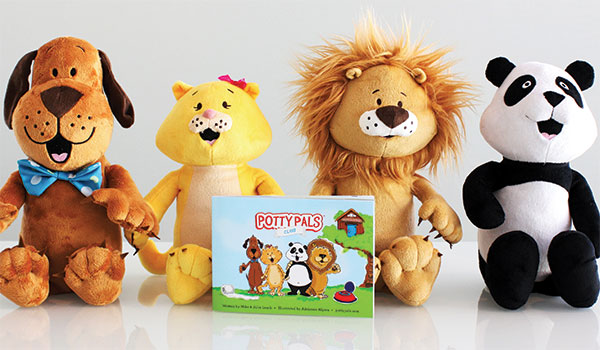 The Leaches initially came up with the concept for Potty Pals in 2011 while they were potty training their second child. They couldn’t find a comprehensive kit on the market similar to what they had in mind that not only reinforced positive behavior but also made potty training less daunting. This led them to develop their own system, which was the initial idea for Potty Pals. Armed with information from the 2014 NFL Consumer Products Boot Camp workshops on building a business in consumer products, from protecting intellectual property to sales and promotion — “A lot of it was geared toward how to get an NFL license for your product,” Leach relates, explaining the NFL has been making an effort in the past 10 years to make opportunities for players after they retire from the playing field, including executive programs with such prestigious MBA schools as Harvard and Wharton — and the response to their prototype they had brought, they moved forward on their idea. “The positive feedback we received at the NFL Consumer Products Boot Camp is really what encouraged us to formally develop the Potty Pals concept,” says Mike Leach.

“It took three years to get to the prototype,” says Julie Leach, who has an MBA and a business background in sales, relating they had talked to business and financial advisors as to the product’s viability. The best advice, relates Julie, came from former New York Giants linebacker Carl Banks, who has established a successful clothing line. In addition to offering help in getting word out about their product, “He told us to launch while Mike was still playing,” she says.

Crediting input from their children, now elementary school-aged, the Leaches explain they developed four characters, each with a different personality so children can choose the one they relate to best. Says Julie, “It was fun for them to see us work on the project and bring it to life — and be part of the process.”

Funding the enterprise themselves, the Leaches also built a community benefit into their business plan and donate 10 percent of the proceeds to Phoenix Children’s Hospital.