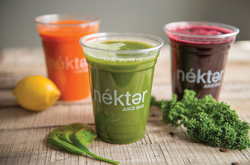 Educating their target market is part of Alexis and Steve Schulze’s strategy for marketing their Nekter Juice Bar stores, which recently opened its sixth in the Phoenix area. “Our most effective method is engaging in the communities,” Steve Schulze says, citing elementary schools and such health-related businesses as yoga and pilate studios as prime opportunities and explaining they set up a tasting table and educate people about what the fruits and vegetables do for their bodies. With a product that uses only all-natural ingredients, Schulze says their goal is to reinvent juice and inspire people to live a healthier lifestyle.

After founding their company in California in 2010, the Schulzes chose Arizona for their first venture out of state. The decision was partly based on pressure from family and friends in the Phoenix area who “had been asking for quite some time for a Nekter,” according to Alexis. But also, Steve says, “The No. 1 social media request [for a location] was in Arizona.”

Financing their venture initially from their savings, the Schulzes were able to secure an SBA loan that enabled them to grow to six stores. There are now 50 across the West, with a concentration in Arizona where the Schulzes expect to have 12 to 15 in the next 15 months. Commenting on the business-friendly environment, Steve says. “From costing and processing standpoints, with city planners, contractors and builders, Arizona is by far the best state to work with.”