You are here: Home / In Business / Managing Conflict: A State of Understanding
In Business  |  Roundtable  |  December 2017

Managing Conflict: A State of Understanding 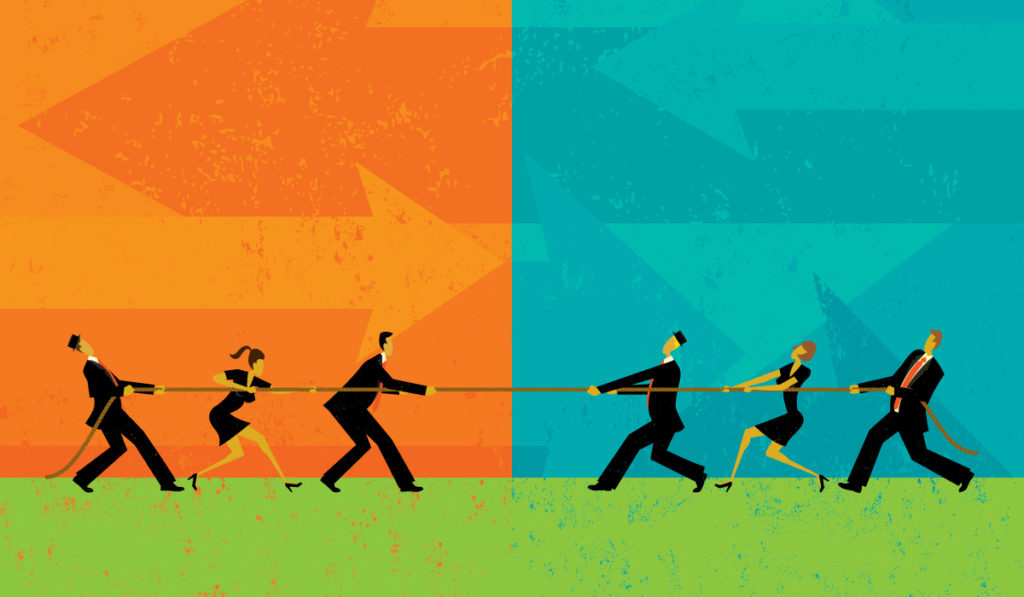 The following are some keys to developing that understanding for HR professionals tasked with addressing conflict between employees; between managers and employees; and between departments, divisions, etc.

Learning to Manage Conflict Is a Participative Process. Please Play Along.

It begins by me asking two questions. Here is the first:

I’d like you to pretend you are describing yourself to a stranger, and you’d like that stranger to know everything about you (that you’d want them to know about you) in six, or eight, or ten words. What are those words?

People will think about that question for a moment, then they will give me their words. And when they give me their words, what they are doing unknowingly (and precisely the reason I ask the question the way I do) is declaring their personal values.

There are a couple of reasons it’s important to identify personal values. The first is, all human behavior is a function of personal values. A person’s behavior will either honor a value or defend one. The second is, personal values are also a person’s triggers. Any situation that challenges one of a person’s values will cause that person to become emotionally reactive. A point I make to HR professionals: If you don’t understand someone’s values, you won’t understand his or her behavior, and vice-versa.

Once we have declared values, I ask the second question:

Please tell me about a situation that tends to bring out your worst…that turns you into that person whom you don’t want to be, but are anyway.

Again, people will consider the question for a moment, and then answer it. Inevitably, the situation they tell me about will tie back to one of the values they identified when they answered the previous question. For example, perhaps one of their words was “consideration,” that is, being considerate of others. Then the situation they tell me about surrounds their observance of another person being inconsiderate, or they themselves being accused of being inconsiderate. In either case, the result is the same — emotional reactivity.

Conflict exists when someone feels like one of his or her personal values has been offended, and by answering the second question, they are identifying their individual “hot situations.” Hot situations are those situations that are prone to offend an individual’s values. In order to effectively manage those situations, a person must first be able to identify them.

That question also serves to help the person connect the dots between a personal value being offended and becoming emotionally reactive as a result. That connection can go a long way to helping people understand their own behavior.

Once becoming emotionally reactive, what remains is to identify someone’s “default reactionary style.” People will react as “victims” or “in conflict.” If reacting as a victim, that person will withdraw, stop communicating, feel helpless and powerless; the prevailing idea is, “I lose.” If reacting in conflict, that person will lash out, become angry and aggressive, argumentative and combative; the prevailing idea is, “I win.” Regardless of the default reactionary style, the ultimate challenge is to learn how to interrupt the negative emotional reaction and transform it into a positive response.

There are two levels of interruption. One is simple restraint. That is where the emotion still exists, but the destructive action does not. The problem with restraint, though, is it is a diminishable resource — a person can run out of restraint. The second level is where the emotion no longer exists by virtue of dissociating the perception of intentionality with respect to the observed or witnessed behavior. Without the emotion, there is no fuel for the reaction, and without the reaction we are left, simply, with a situation that we would like to be different.

R.W. Burke, author of Quiet the Rage, is a top coach on Ford Motor Company’s Consumer Experience Movement (CEM) project, covering 25 dealerships in seven states. In his capacity as coach, he’s responsible for developing the dealerships’ 2,500 people (and the organizations themselves), both personally and professionally, to better understand the ways those people are limiting themselves in life and to break through those limitations to new levels of performance. He has logged more than 10,000 hours of individual coaching, with the vast majority focused specifically on helping others manage conflict.