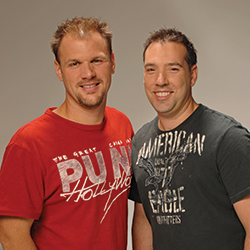 Local DJs Johnjay Van Es and Rich Berra of the Johnjay and Rich Show that airs in the morning on KZZP KISS-FM have taken a new business move in creating their own Johnjay and Rich Radio Network, aiming to build national name recognition from their base in Phoenix.

“We’re doing it all out of Phoenix; everything is Phoenix” — from sales to Web design — says Van Es, who shares that Clear Channel Media and Entertainment had pressured the pair to move to Los Angeles or the East Coast and would have beamed the show back here.

Being “really personal” has been a key part of the show’s success, according to Berra. “Someone on the show, you will relate to,” he says. “We feel our show can play in different time zones, a lot of different segments, different cities.” Access to a satellite, a crucial need for a broadcasting network, was already in place thanks to the show being syndicated in a few markets. These were markets that had contacted them; now, with their own sales team, they will actively seek out additional markets.