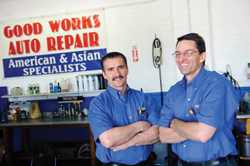 With the growing popularity of hybrid cars, Good Works Auto Repair in Tempe has moved into a niche those car owners were not finding at their dealers — battery conditioning. “There’s no incentive for the dealer to do this,” explains Nathan Merrill, co-owner of the car repair business, noting the dealer would see more profit in replacing the battery and that maintenance is generally not covered under a warranty. A low-performing battery can be “conditioned,” which will increase the car’s fuel mileage and pep.

While batteries are the focal point, joining the Hybrid Shop Network and using its proprietary equipment “opened the door to all hybrid service,” says Merrill, adding that previous to this, he didn’t feel he could give hybrids full bumper-to-bumper care. The Hybrid Shop Network is a fractional franchise, and Good Works is currently its only franchisee in the state.

After seeing the process presented at the annual conference of the Automotive Training Institute earlier this year by Mark Quarto, who holds a doctorate in mechanical engineering and whose 28 years at General Motors included work on the pilot hybrid and the Volt, Merrill says he and partner Glen Hayward “took the opportunity to be leaders in our area in hybrid repair.” The scientific approach impressed him, he says, sharing that training previously available had centered on “how not to kill myself” handling hybrids’ electrical current that is five times greater than what is considered “high voltage.” The Hybrid Shop Network equipment enables them to test the battery’s energy and evaluate the condition of its capacity to deliver electricity, rather than just looking at whether individual cells are bad, and, after servicing, compare its condition to a new battery and show its state of health.