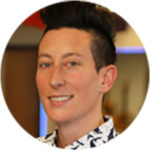 Kado Stewart has been working as a leader in the LGBTQ community since 2008, when, at 22 years old, Stewart created and founded Camp OUTdoors. Now in its 11th year, Camp OUTdoors has been a safe space where more than 1,100 LGBTQ youth across Arizona and the country have come to develop leadership skills, build self-confidence and work to make a difference in their communities. Camp OUTdoors! won the interest of National Geographic and was featured in a 2017 special called Gender Revolution: A Journey with Katie Couric that aired in 40 countries. Camp OUTdoors is a signature program of Arizona’s largest LGBTQ youth-serving organization, one•n•ten.

Stewart has been developing programs at one•n•ten for the past 10 years. As the director of Programs, Stewart leads the one•n•ten program team in ensuring the lives of LGBTQ youth are enhanced through empowering social programs and critical supportive services. Each year, the one•n•ten team serves nearly 1,000 unique youth, ages 11–24, through its Central Phoenix youth center; five satellite sites operating in Flagstaff, Scottsdale, Mesa, Glendale and Queen Creek; and the downtown Promise of A New Day supportive housing program.

Digging in where needed, Stewart works to cultivate community partnerships to create equitable spaces for the LGBTQ community. From managing the partnership between one•n•ten and K-12 to provide a safe learning environment at “QBLC” where young people can earn their High School Diploma, to working with local health agencies to develop and provide safer sex education for LGBTQ youth, Stewart is a consistent leader in the organization’s mission.

Stewart has a passion for educating the broader community and has trained dozens of companies and organizations in LGBTQ-inclusive best practices, some of which include the Phoenix Police Department, Phoenix school union and the local behavioral health agencies. Working to bridge the gaps between the LGBTQ and police communities, Stewart is currently a member of the Phoenix Police Department’s LGBTQ Advisory Board.

Stewart is an American Camp Association-certified camp director, a Wilderness First Responder, and enjoys guiding backcountry wilderness trips. With a passion for music, Stewart is the drummer in an all-female band that often volunteers its musical talents in the community. Stewart is a Leading for Change graduate and an alumnus of Prescott College, with a Bachelor of Arts in Social Justice, Gender & Sexuality studies.