You are here: Home / In Business / Jeffrey Martin: Creating an Industry for Natural, Renewable Rubber
In Business  |  From the Top  |  November 2015

The Yulex Corporation is leading the way in a new industry of specialty, purified, environmentally friendly rubbers 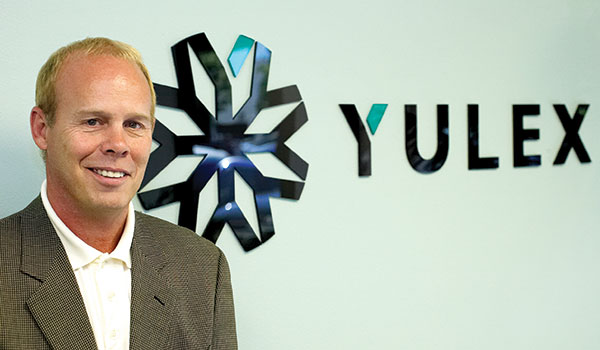 Fifteen years ago, Jeffrey Martin co-founded the Yulex Corporation with Dan Swiger after learning about a technology licensed from the United States Department of Agriculture to extract natural rubber latex from the guayule plant. Yulex’s mission is “to protect and improve the planet and its people by providing pure and improved plant-based products, which promote the sustainable production of materials and energy,” Martin explains. A material science engineer and part of two successful medical device startups, Martin says Yulex and its mission is “right up my alley.”

Rubber is everywhere, he points out. People use rubber on a daily basis — as they stretch on a yoga mat, lace up their running shoes, play fetch with their dog, snap on latex gloves. These everyday products touch our skin, yet most individuals don’t know what is in rubber or how it’s made. More than 40,000 rubber products are derived from petroleum-based and toxic sources, says Martin, the company’s president and CEO.

Southeast Asia is currently the main exporter of rubber. Martin is looking to change that by building a natural rubber industry in the United States in an environmentally conscious manner through the use of the guayule plant. Guayule, a natural source of rubber indigenous to the Southwest United States and Mexico, is a wild crop. In order to build the industry, Martin explains, Yulex has had to domesticate the wild crop into a commercial crop.

Yulex started as a small pilot plant, renting office space and growing the guayule crop on an experimental basis. “Five years ago, we scaled up and built the first manufacturing facility,” Martin explains. The company expanded to a five-acre purification plant in Chandler due to a demand for premium, highly purified rubber by consumer product companies.

Acknowledging the importance of believing in the business and his team to successfully meet the challenges of growing the company, Martin says, “Building a successful business takes a broad vision, but the willingness to take thousands of small steps to get there.”

Once Yulex demonstrated the benefit of using sustainable and safe rubber, Martin says customers embraced the new products. After a crop is grown, Yulex extracts and purifies the rubber, ending with finished raw materials, Martin explains. Yulex then sells the material to companies to develop new products, though Yulex’s hand in the manufacturing doesn’t stop there. “Our scientists and engineers will work with the companies to help create prototypes, meet product specifications and help with market research,” Martin says. “We work all the way through to the consumers.” This unique model was needed to accelerate customer adoption of these products and expand the company.

Martin believes the “tipping point in the industry will be the breakthrough of our hybrid technology,” an advancement called genome-assisted breeding technology. Molecular breeding for plants is a recent advancement, Martin notes, explaining this helps domesticate wild crops to ensure consistency — which is necessary in a crop’s commercialization.

“The real secret to success is the agriculture,” Martin says. It takes time to provide commercial yields. An initial guayule crop will grow in two years; with a root system in place, it then takes one year for the plants to regrow. Once there is a high yield of rubber per acre through molecular breeding, Martin is betting the industry will follow.

Yulex is a small company that focuses on consumer products, which is only 30 percent of the rubber market. Larger companies concentrate on products for the transportation industry, such as rubber for tires. Martin’s vision for Yulex is to perfect and then provide the hybrid technology to manufacturers. Multiple companies needs to be working to create renewable rubber materials, Martin says. Once they have the technology, these larger companies will add to the industry and produce guayule rubber-based products.

The Arizona climate is the perfect place to build this industry, Martin says. The guayule plant grows best in an arid climate, which makes our state the perfect place to develop the agriculture, while the support and infrastructure in Arizona has also helped launch Yulex. Yulex was supported in its early stages by the University of Arizona’s Maricopa Agricultural Center and the U.S. Arid Land Agricultural Research Center, a local division of the USDA in Maricopa. This new industry is “all happening within the State of Arizona,” Martin says.

Arizona has the potential to be the main hub for the natural rubber industry, creating agricultural, scientific and engineering jobs, Martin believes, although he sees this growth requiring a shared vision from industry, academic, federal and state sectors. Yulex is recognized as a leader in the industry and an important contributor to the state’s economy, and has amassed numerous awards that include the Fast Lane Award from the Arizona BioIndustry Association in 2013 and the Green Innovator of the Year Award from the Arizona Technology Council in 2009 and 2011.