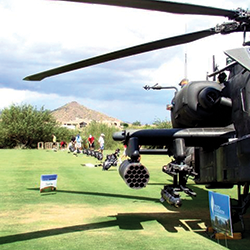 The Apache Longbow helicopter sitting on the golf course indicates the Salute to Armed Forces Golf Tournament is not an ordinary round of golf. Punctuating play with further excitement at various holes are additional contests, among them a hole-in-one challenge sponsored by a car dealership, the Phoenix Coyotes’ challenge to make the golf swing with a hockey stick and a “Beat the Pro” challenge against XTRA Sports radio’s “Backspin the Golf Show” co-host Corey LaRusso.

With seed money from the employees at Boeing’s Mesa Apache plant, the Epilepsy Foundation of Arizona founded its Operation Outreach program three years ago, and keeps it going with the funds raised by the golf tournament. The program provides resources and referral services for soldiers and their families who have suffered a traumatic brain injury, which presently number about 15,000 in Arizona.

With all the advances in protection, EFA’s executive director Mark Valentino points out that the head remains most vulnerable to injury. Says Valentino, “The more who come back [from war], we have to be ready, because we have no idea how many will develop epilepsy.” Noting that the brain is very fragile, he adds, “Traumatic brain injuries are on the rise.” Up to 34 percent of those who have suffered traumatic brain injury are at risk of developing post-traumatic epilepsy — even higher among populations that have experienced a penetrating head wound.