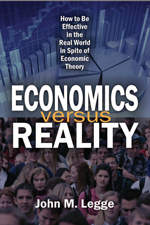 John M. Legge shows the many ways in which the real world diverges from economics textbooks. He argues that mainstream economic theory took a disastrous turn 140 years ago, when it attempted to use calculus to explain human behavior. A real economy involves people who are not variables in equations. This error led to a second one: mainstream economics becoming obsessed with equilibrium. However, constant change is the reality and one cannot explain the present without understanding the path taken to get here.

Title: Economics versus Reality: How to Be Effective in the Real World in Spite of Economic Theory
Author: John M. Legge
Publisher: Transaction Publishers
Available: 12/31/2015
Pages: 308
$29.95