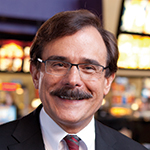 Dan Harkins is the man behind the curtain — literally and figuratively. As president of Scottsdale-based Harkins Theatres, Harkins is the man behind the scenes of the largest family-owned theater chain in the country, operating more than 400 screens. Most are in Arizona, predominantly the Metro Phoenix area, with a handful in California, Colorado, Oklahoma and Texas.

It can be said the movie theater business is in his blood. In 1933 at the height of the Depression, Dan’s father, Dwight “Red” Harkins, opened Tempe Arizona’s first movie house, The State Theatre. By 1973, Red had built a chain of five movie theaters throughout the Valley, which later grew into the Southwest’s largest independent exhibition company. Over the years, Harkins Theatres has opened or acquired more than 400 screens. “When choosing our locations, we look for communities that are underserved in quality or quantity of movie screens,” Dan says. “When we identify these areas, we look for opportunities to create a destination and entertainment experience that has lasting value for the community.”

Dan was exposed at a young age to the family business that later became his livelihood. Along the way, he worked every job in the theater, from janitor to doorman to projectionist. In 1974, Red passed away, leaving Dan as head of the family business. He was only 21, but Red had taught him well. “I remember how hard my father worked to bring the most happiness to the most people. I can’t think of another career I would rather being doing,” Dan says.  “I am proud to honor his legacy through providing that same happiness he brought to moviegoers, to our avid patrons today.”

Part of Red’s legacy was one of entrepreneur and showman — qualities that Dan embraced in his approach to running the family business. Memorable promotions proved to be his secret weapon. “Marketing and ingenuity had a lot to do with the business growing when I took over the reins from my father,” Dan says. “Some of the promotions we developed helped set the company on track for future growth.” For example, in the mid-1970s, he created a Monty Python and the Holy Grail promotion to engage customers. Moviegoers were encouraged to come dressed as knights, serfs and kings — all on fake horses. The movie ran for 34 weeks, the longest-running show at the time. Harkins later sold the ad campaign to the studio. This success was a way to maximize ticket sales while setting his theater apart from the competition.

One promotion in particular earned national acclaim. In 2009, Twentieth Century Fox held an online voting contest among U.S. cities to host the premiere of X-Men Origins: Wolverine.  In order to ensure a win, Harkins organized a campaign that drove people to the website to vote for his theater — focusing on a single location that he encouraged patrons of the other locations to support. He also created auditorium announcements to further engage moviegoers. More than 3,000 cities competed to host the premiere, and toward the end of the voting period, Tempe and Davis, Calif., were virtually tied. To try and beat out Davis, Harkins and Tempe Mayor Hugh Hallman hosted a voting party to rally moviegoers to participate. In the end, Tempe prevailed and held the premiere at Tempe Marketplace on April 27, 2009.  In a cordoned-off section of the shopping center’s parking lot, Harkins Tempe Marketplace hosted Hugh Jackman, along with other cast members Ryan Reynolds, Liev Schreiber, Will.i.am, Taylor Kitsch and Lynn Collins and director Gavin Hood, alongside nearly 10,000 fans. It’s that fun element on top of practical ones that keeps customers going back.

Another point of difference today is the theater’s comfort factor, as the seating was strategically designed for optimal relaxation. Harkins’s staff started the process by evaluating all of the seats available from every manufacturer, but nothing seemed to be the right fit. In response, they took an innovative approach and designed their own, to accommodate guests “of all shapes and sizes.” “We call our exclusive seat the ‘Ultimate Rocker Love-Seat’ because it offers lumbar support, rocks back and forth so guests can find the perfect viewing angle and has a lifting armrest so you can get comfortably close to your loved one sitting next to you,” Harkins says. “We hear from our guests that one of the reasons they love Harkins Theatres is because of our Ultimate Rocker Love-Seats!”