You are here: Home / In Business / Co-Working and More in Office Space for Small Business
In Business  |    |

Co-Working and More in Office Space for Small Business 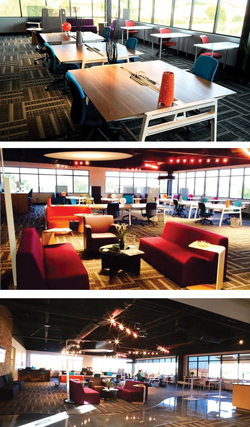 Although founder John Mahon describes EZ Spaces, recently opened in Gilbert, as an “environment to be successful without the overhead of an office,” he and co-owner Devon Dickinson designed the business to be more than a co-working space. Twice-monthly workshops are part of the plan, in addition to the site’s office amenities.

Offering day passes as well as membership of 10 days per month or unlimited, EZ Spaces provides a business address and mailbox, Wi-Fi, printers, conference rooms with state-of-the-art technology to accommodate wireless devices, a coffee station and a concierge service. It’s an open work environment, but there are four phone booths for private conversation, and lockers so members can leave their work rather than have to carry it back and forth. Like the space itself, the workshops cater to “the start-ups and one- to two-person companies taking the next step up from working from home or the corner coffee shop,” Mahon says. These workshops may cover Photoshop or WordPress or what it means to effectively have one’s business website index with search engines.

Able to accommodate 60 people at a time, the co-working space creates a network of people who can correlate and collaborate with one another. “It’s fun to watch those relationships develop,” Mahon says. “In launching EZ Spaces, I created a solution to a problem that I had myself. The business world has revolutionized itself almost beyond recognition over the last several decades, and people are so plugged in today that many professionals, despite missing the social side of an office environment, no longer need to lease an expensive office space in order to conduct business efficiently.”