You are here: Home / In Business / Chef Eddie Matney: Restaurateur with Panache
In Business  |  From the Top  |  March 2013 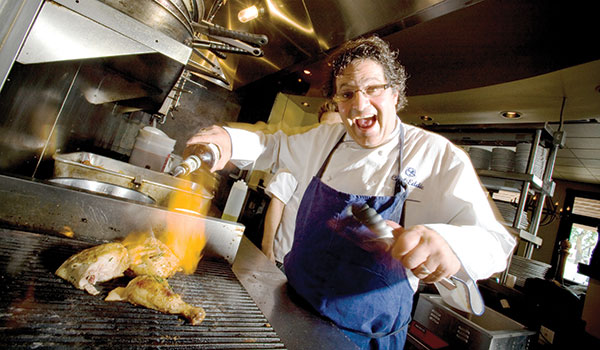 As Chef Eddie Matney can attest, from the series of restaurants to his credit, adjusting to a new group of regular customers after opening a restaurant is important. The regulars who now frequent Eddie’s House, in downtown Scottsdale among a host of art galleries, is a much different group from those he served at Eddie Matney’s, a previous restaurant that was located in the financial district at 24th Street and Camelback Road in Phoenix.

What he’s learned first-hand over the years — from the day he opened Steamers in 1986 to today when he goes to work at Eddie’s House, which opened in the fall of 2008 — being a successful restaurant owner involves much more than keeping up with the latest food trends. One of the main factors, he says, is figuring out how to make each and every one of his customers feel important.

“I greet them all in the restaurant when they come in and acknowledge them, and I get to know my regular customers,” Matney says. This includes making it a point to remember the specific preferences and traditions of the diners he sees frequently. “It’s the personal things like this that matter, like remembering that one of my female customers likes to celebrate her birthday month and not just her birth day.”

While being aware of what foods are currently being discussed and are in demand is a good idea, Matney says it is not what sustains a restaurant year after year. “I’m not discounting this at all. There are definitely times when you’ll hear customers saying something like, ‘Oh my God, I hear that kangaroo is the new white meat!’” Matney says. “But the amount of people who do this is actually very small.” Food, in fact, plays only a part in bringing customers back to his restaurant. The host or hostess who greets them in a friendly way is important, as is easy access to the restaurant and ample parking. Matney also makes sure his restaurant’s phones are forwarded to a live person. Even when his restaurant is closed — including late at night — if a customer calls, Matney, himself, may pick up the phone. “There have been times when guests have called me up at 11 o’clock at night to say they have company coming in and they ask if we can take care of them and I say, ‘Of course.’ It’s about making people feel like they have a restaurant at their fingertips.”

Matney also believes strongly in keeping in touch with his customers on a regular basis. In addition to social media, he has found it effective to send out weekly emails that have some type of theme related to the current specials he is offering. He knows he is reaching people, he explains, by the number of guests who mention the emails when they come in.

A recent example was an email that played on the number four: four of the biggest car shows in the country were in Arizona; four teams were left in the NFL playoffs; there were four more days until the National Hockey League started playing; and Eddie’s House was serving up “not-for-the-kids” berry lemonades for $4. Another email advertized what Matney calls “dueling plates” that tied into that weekend’s NFL football playoff rivalries — diners could choose from selections like “Denver Bronco Filet of Beef with Manning Mashed Potatoes” topped with “Baltimore Raven Crab finished with a Ray Lewis Shallot Ragout.”

Naming entrées and side dishes after football players seems to be beyond the realm of creativity shown by many chefs, according to Matney, but he believes keeping things fresh and new and continually finding new ways to re-create classic dishes has played a role in keeping his restaurants open and the customers coming in. “I love keeping things creative, like when I make a pot pie, I’ll make it upside down, with puff pastry on the bottom, and the filling on top. I think doing things like this will also help contribute to your success.”

When the meal is over and the customers are getting ready to leave, Matney is sure to thank them for coming in. “One message that we convey all of the time is the fact that we appreciate it when people come to us and bring us business. We know they have a choice, and we are grateful for everything people do for us.”

In the Kitchen with Chef Eddie Matney