Business Means to Stop the Bullets 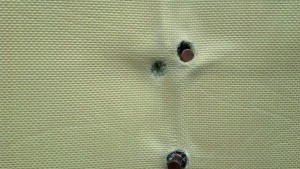 In a situation where a gunman bursts into a public space and begins random firing, people’s instinct is to duck for cover behind furniture. Jeffrey Isquith, president and CEO of Ballistic Furniture Systems, wants to be sure the furniture can actually stop the bullets.

He recalls being in Tucson the day after the Gabby Giffords shooting and realizing that shootings seem to often happen in public spaces, “and there is nothing in that space to protect the public.” Taking his background in the architecture and interior design furnishings world, he reached out to manufacturers of products for commercial spaces. Then, also having familiarity with the technology available to protect law enforcement and military, he consulted people he knew in the ballistic world regarding “how far technology has come to be able to stop a bullet with something fairly thin, fairly light, that can be put into a seat back, for example, or a work station wall.” The result is Amulet, a thin, light, moldable product that works with a manufacturer’s product.

Established in 2011, Ballistic Furniture Systems is the pioneering manufacturer of ballistic protection for public spaces and was recently honored with the Venture Acceleration Award from the law firm of Fennemore Craig. Amulet I and II can protect against handgun fire up to a 44 Magnum, which, Isquith says, is “90 percent of what you run into in the market.” Amulet III protects against battle-rifle fire. Ballistic also offers an “E” Kit to upfit existing office systems.

Ballistic’s strict quality control — which Isquith says is “more like life-saving control” — follows a rigidly adhered-to chain of custody with everything coded to ensure traceability. Isquith says, “We start with the fibrous material, and track every step from our hands to the hands of our customers, the manufacturers, who also must trace each step.”

Keeping the entire manufacturing process in the U.S. is critical, he says. Explaining, “Overseas, there’s no guarantee of any traceability, authenticity, or that it’s been tested,” he notes that means its performance is unknown.

Referring to shooting tragedies such as Sandy Hook Elementary School and the Navy Yard, Isquith says, “This business was not started as a company; it was started as a mission to protect people.”