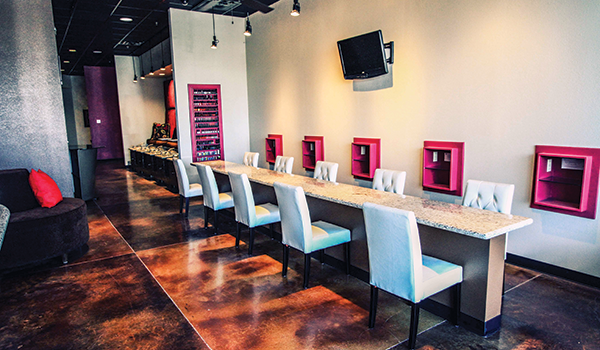 Having survived the recession that hit the economy only a couple of years into their entrepreneurial endeavor, Chandler-based Fuchsia co-owners Lisa Vukovich and Erin Owens recently moved their day spa into double the space.

They attribute part of their success through the downturn to providing the pampering of a spa at an affordable price. Says Vukovich, “Clients who were used to going to a resort spa started coming to us.” The other big factor was developing their business around a membership base, which provided guaranteed revenue. “People stayed, going into the recession,” Vukovich says. Recognizing the importance of customer service, she and Owens focused on establishing an atmosphere of friendliness. Says Vukovich, “We’re like a family. We know what’s going on in our members’ lives.”

Fuchsia was the first day spa in Arizona to offer massage facials such as microdermabrasion, according to Vukovich. She and Owens added a nail bar and pedicures to their spa services as the recession proceeded, making more productive use of space they’d initially maintained as a boutique. “It was an amazing bump in revenue,” Vukovich says. Another effective response to the recession was adding service enhancements that both raised the ticket price and increased client satisfaction.

The business brings Vukovich full-circle, as she had put herself through college as a cosmetologist. She and Owens self-financed their endeavor, leaving jobs in corporate America to open Fuchsia in November 2006 in a 2,000-square-foot space. They recently expanded to a 4,000-square-foot location. Franchising is the route they are considering now for further expansion.