You are here: Home / In Business / Arizona Fall League: Developing Talent for the MLB
In Business  |  By the Numbers  |  October 2014 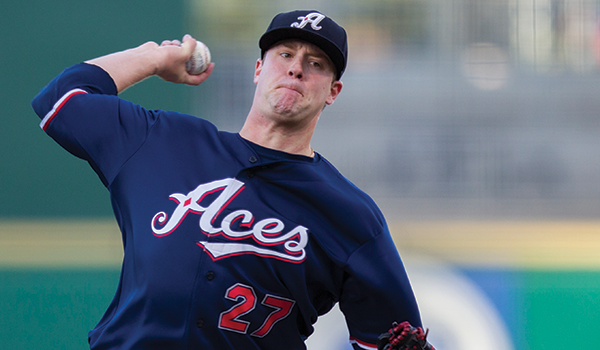 Major League Baseball’s best kept secret is right here in Metro Phoenix, and, for baseball fans, it provides a chance to see a “Who’s Who” of the best Minor League players in action. Now in its 23rd season, the Arizona Fall League is a pivotal cog in baseball’s player development process. All 30 MLB clubs must participate by sending seven of their top prospects to the league. Managers, coaches, umpires and other baseball staff also participate in the Fall League, which takes place each year from late September through mid-November. There are six Arizona Fall League teams: the Scottsdale Scorpions, Mesa Solar Sox, Salt River Rafters, Glendale Desert Dogs, Peoria Javelinas and Surprise Saguaros. The teams are broken into two divisions, East and West. The games are played in the Spring Training stadiums used by the Giants, Cubs, Royals, Rangers, D-backs and Rockies. And for fans, the price is a steal, with tickets costing $8 for adults, $6 for kids and free parking. A family season pass for $115 includes admission for six people for the entire season. Seating is first come, first serve, so fans can sit as close as they’d like.

Since its inception, the AFL is
responsible for helping develop:

And this past July, 36 ex-AFL players and four umpires were selected to participate in MLB’s All-Star Game plus 10 former players in the Futures Game and six of 10 participants in the Home Run Derby.

“What makes this League so unique is that it is the only place in the country where all 30 MLB organizations are in one league under one roof,” says Steve Cobb, Arizona Fall League director. “Scouts love it, fans love it because it’s like the Minor League All Stars … the players wear their respective team uniforms, and, because they’re hungry to get into the Major Leagues, they play hard, they hustle and they make themselves accessible to sign autographs. And the majority of them will make it.”

Before the league began, the vast majority of players were employed through the Minor League’s six-month season. The players often would seek employment off-season in Mexico, Venezuela, Puerto Rico and the Dominican Republic, where the private enterprises they worked for placed a heavy emphasis on winning. “Players who were over-used would suffer injuries, so MLB created the Arizona Fall League as a way to govern and monitor players’ development in a safe environment. The League’s creation also provided a way to accelerate players’ careers from the Minors to the Majors,” Cobb says. And what is good for MLB is proving good for fans, who turn out in numbers that average 65,000 at all games for the season. “Because Major League Baseball essentially underwrites the Fall League, we’re able to keep ticket prices low,” Cobb says.

While it doesn’t have the economic engine of the Cactus League, the Fall League does contribute to Phoenix’s local economy since the players, managers, coaches and other staff seek temporary housing, rent cars and spend money on other living expenses. In addition, the League pays for rent and utilities at the facilities, hires concessionaires and pays sales tax on merchandise.

MLB Network televises three Fall League games after the World Series and MLB.com also streams some games live. Looking to the future, Cobb, who has been the Fall League’s director for 22 years, hopes more fans will attend games. He also hopes to see more games showcased on MLB.com, and eventually, he’d like to introduce international play to the Arizona Fall League.