How Will Arizona’s Second-largest Industry Fare? 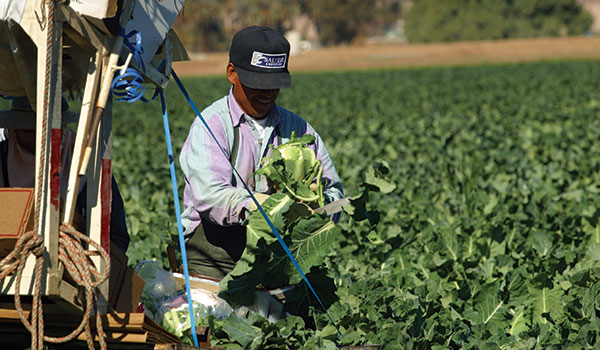 Harvesting cauliflower in Yuma County, which has the longest growing season in the country

Last month, the 2012 Census of Agriculture mailed forms to farmers and ranchers nationwide asking them questions relating to all areas of farming and ranching operations, including production expenses, market value of products and operator characteristics. In 2007, Arizona was seen as a major agricultural state, ranking third in the nation for total value of vegetables, melons and potatoes produced and second in U.S. lettuce production. How will Arizona rank during this most recent census and what can our state’s second largest industry expect in 2013?

At press time, Julie Murphree, Arizona Farm Bureau’s public relations, marketing and agriculture education director, was concerned about the “Fiscal Cliff” negotiations and the Inheritance Tax, or, as many in the industry call it, “the Death Tax.” Effective Jan. 1, the tax was set to jump from 35 percent to 55 percent, with the exemption dropping from $5 million to $1 million, bad news for younger farmers and ranchers whose parents pass away and leave them the farm. Anything more than $1 million will be taxed at 55 percent, and Murphree was quick to point out that, with land values the way they are in Arizona, a small to medium-sized farm can reach that $1 million value quickly. “The inheritance tax will put family farms out of business, and right now 98 percent of farms in America and Arizona are family-owned and -operated. They are the purest form of small business in this country. So in 2013, this is of great concern for us,” she says. Murphree explains that young farmers do not have the savings to afford life insurance premiums to cover the costs of an elderly parent, and this puts the whole farm in jeopardy. “There are almost 4,000 cattle ranches in Arizona that raise a total of 900,000 head of cattle each year. Many of the ranchers are third- and fourth-generation Arizonans. This inheritance tax could wipe that all out, since selling the farm or ranch would be the only option to pay the taxes,” she says.

Don Butler, director of the Arizona Department of Agriculture, is cautiously optimistic about 2013, citing several challenges that need to be overcome. “Agriculture is definitely a growing business in Arizona. We estimate it was a $12.4-billion industry in 2011 — that’s up from $10.3 billion in 2008. But that number could be larger,” he says. “One of the challenges we face in Arizona, like farmers across the country, is a labor shortage. We have growers in southwestern Arizona that have reduced the amount of crops they plant because they aren’t sure they’ll have the workers they need to harvest.” Mother Nature presents another challenge. The ongoing drought in Arizona creates obstacles for the farmers and ranchers, but Butler says farmers are creative. “In the Yuma area, some are going to drip irrigation to ensure the valuable water gets to the roots of the plants. Some are changing crops to adapt to the environment and the market,” he says.

Butler says the disconnect between people and their food gives agriculture one of its biggest challenges. “Americans have one of the safest food supplies in the world, yet most people don’t comprehend what happens before they buy it at the grocery store. Did you know it takes two years from conception to consumption for a hamburger? And that’s if nothing goes wrong. Ranchers and farmers work diligently to protect the food from bugs, disease and disaster … all to make sure everyone can have the foods that they enjoy,” he says.

Brett Hunt is business manager of Rousseau Farming Company, a Phoenix-based family farm that has been farming in Arizona since 1892. The 10,000-acre farm grows fresh vegetables, melons, wheat and hay, and ships fruits and vegetables to all of the lower 48 states, Canada and Mexico. Rousseau focuses primarily in the leafy greens portion of agriculture, which includes lettuce, spinach, kale and cabbage. “That sector of the industry alone contributes about $1 billion a year to the Arizona economy, employs approximately 20,000 people and supplies about 89 percent of the lettuce to the entire country between November and March,” he says. In fact, Yuma is the lettuce bowl capital of the world during the winter months, and then lettuce production shifts back to California as temperatures warm up for the summer. The state Ag census counts 452 farms in Yuma County, totaling nearly 210,500 acres of land in farms and more than 193,000 cropland acres.

While the current drought is a concern to Hunt, he feels fortunate to have “the great surface water delivery system in Salt River Project and the Central Arizona Project.” And while his farm battles some of the same threats farmers have throughout history, including bad weather, pests and crop failures, he welcomes drier weather since it is good for their prospects and means they can harvest most days. “When it is a rainy year, it can be challenging because it is tough to get in and harvest in the mud,” he says. “Agriculture is a very tough job, and only strong and dedicated individuals can do the tough tasks and long hours which it requires.”

Bob McClendon, president of McClendon’s Select in Peoria, has been farming since 1975. His farm is small in comparison to Rousseau Farming Company, at 50 acres total in both Peoria and Goodyear, but his focus is different, supplying fresh produce to more than 50 restaurants statewide and also selling at farmers markets. “We decided in 2000 to convert all of our operations from conventional farming to organic farming. I could see the health benefits and trends. It absolutely exploded,” he says, citing that his business is growing exponentially and estimating a 20 percent increase in demand each year. Like Rousseau, McClendon’s faces the same challenges finding good labor, but the small farm turned to technology to adapt to other production challenges. “We’re one of the highest-tech farm operations in the state, and we were recently featured on Apple’s website in a small business profile. We also have the latest GPS technology in our tractors that gets us down to sub-inch accuracy. We can drive a half mile and be within less than an inch of perfection for being straight,” he says.

Dee Logan founded Arizona Community Farmers Market with her husband, John, in 1989. She also owns the Farmers Market Support Services and views 2013 as a transition year for farmers, citing challenges such as limited access to land and water, climatic changes, urbanization, lack of resources in rural farming areas and a lack of skilled farm labor. Conversely, there is a growing demand for local food production and identified regional sources that are available in specialty venues like farmers markets. Currently, there are more than 60 active weekly farmers markets statewide that are either seasonal or year-round. This does not include special event markets that are geared around agricultural themes, such as salsa and wine festivals or farm events. “We are seeing more local production, with more small farmers growing to fill the need but with less resources in some instances to do so,” she says.

Farmers markets and other specialty agricultural venues are a growth industry. In the Phoenix metro area alone, consumers can choose to attend close to 20 active weekly markets and several monthly markets. “The Community Farmers Market Group will be working with more farmers market projects in the next two years, and that trend is growing statewide also,” she says. “There will be more pressure on the farmers to produce enough to meet public demand. On the up side, micro farms and urban growers are also seeing this trend as a business opportunity as well as a lifestyle option.”

Arizona agricultural is a $12.4-billion-per-year industry.