You are here: Home / HR & Management / Labor Shortage? Could Be a Job for Our Military Veterans
HR & Management  |  Human Resources  |  September 2021

Labor Shortage? Could Be a Job for Our Military Veterans

Benefits and challenges as veterans enter the civilian workforce 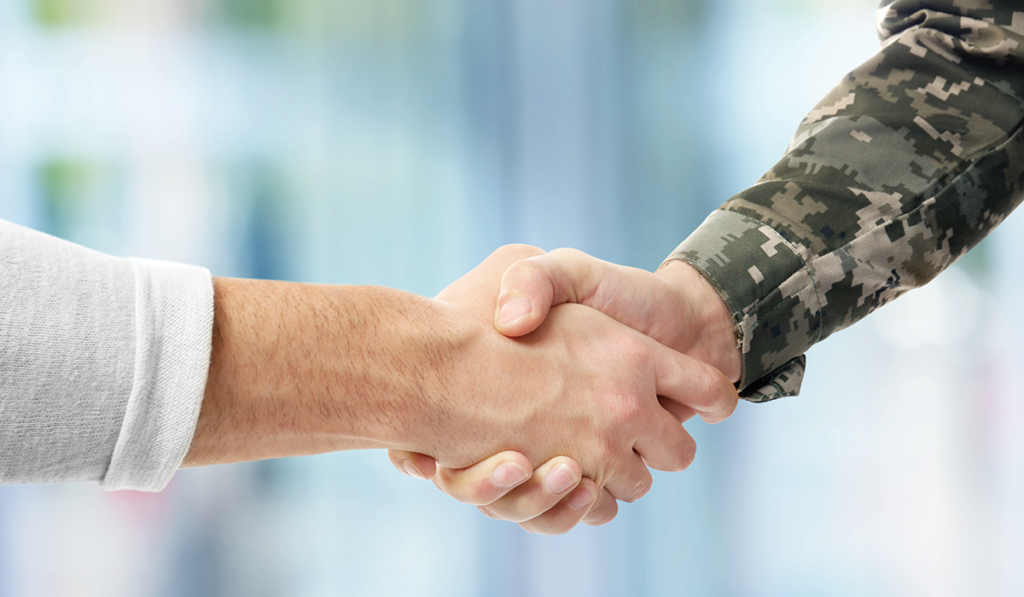 As the economy continues to surge in a post-pandemic recovery, veterans are among those seeking opportunities for employment in a labor market desperate for experienced and dedicated workers.

Labor experts say it’s a job-seekers market now with more opportunities available than people to fill the positions. Although the country is not at full employment, part of that is a result of a record number of employees leaving voluntarily from their jobs. It is unlike any other time in recent history, with extended unemployment benefits coming to an end in September and employers in all industries seeking qualified candidates, including veterans.

“It is critical that military personnel get the support they need as they transition out of the military,” says Paula Pedene, executive director of the nonprofit Honoring America’s Veterans. The Phoenix-based agency sponsors the annual Veterans Day Parade in Phoenix, and helps veterans access a variety of community resources.

“It’s so daunting to make that transition from a very structured environment in the military to having multiple options, such as choosing what to wear each day,” says Pedene, who served in the Navy as a Petty Officer First Class. “Finding the right job fit helps them make that adjustment, and both the veterans and the community benefit.”

One of several challenges veterans face in their job searches is taking their military experience and explaining how that translates to positions in a civilian workplace. An officer’s role may include leadership, management of people and resources, and overseeing large budgets. But a specialist title in the military doesn’t necessarily translate to skills posted for a specific job.

Other challenges for job seekers who are veterans may include culture differences between where they were stationed vs. their home in the U.S.; physical or mental injuries suffered during service; finding meaning in a new position after serving their country; competing with candidates with more direct experience; and not having the necessary training or education for some career options.

Specialists at Express Employment Professionals work with veterans to emphasize their skills and help match them to a fulfilling position. Express Pros also assists with translating military job skills onto a résumé that emphasizes their experience.

Daria Orozco, owner of the South Phoenix Express Pros location, says veterans are prized by employers for their work ethic, especially in the current labor climate. “Veterans are reliable. They show up and they do the job. They know how to stick to schedules, and they learn quickly,” she says. “These are exactly the skills that employers are looking for. These qualities are really important.”

Currently, employers nationwide are eager to find workers from all backgrounds to fill jobs ranging from management level to the mail room. Extra unemployment benefits awarded those who lost their positions due to the COVID-19 pandemic are phasing out nationwide, with Sept.6 marking the final date for those benefits.

In April 2021, the national quit rate peaked at 3.1% — the highest rate since December 2000, when the Bureau of Labor Statistics started collecting the data. People quitting accounted for about 70% of total job losses in April, and the number has remained high in the months since.

“I have five jobs for every candidate that applies right now. And, we have the highest quit rates ever in America since we’ve been tracking that data. Why is that?” asks Stiener-Murphy.

“Employers must ask themselves if it’s because they haven’t created a safe workspace.”

She says the work environment is particularly important for veterans newly entering the civilian job market and observes that when veterans leave military service, they leave behind close-knit connections. “The biggest thing that happens when you leave the service is that you feel a loss of brotherhood,” she says, recalling when she left the Air Force as a staff sergeant. “You’ve been in life-and-death situations together and that connection you have is very strong. When you come into a civilian workplace, it’s very different.”

Office politics are also difficult to navigate for someone who has been facing entirely different day-to-day challenges. Stiener-Murphy advises employers who want veterans in their companies to ensure they are made welcome immediately upon hire and made to feel part of the organization. “Embracing that person and really making them feel part of the team from minute one is crucial for a successful transition,” she says.

Pedene agrees with Orozco and Stiener-Murphy. She says that veterans bring with them the ability to be team players, and “stay the course” for a company’s success. “They’re not looking for a free ride,” she says. “They’re looking to be a part of a team, to help with the bigger picture. They want to work together for a common cause.”

Orozco says having a military background also gives veterans an edge in collaboration among increasingly diverse workplaces. “They have the ability to get along with a diverse workforce. A lot of employees have trouble working with people who are different from them,” Orozco says. “Veterans can relate to different people a little better than average workers.”

Express Pros is so committed to helping veterans secure employment that it established a program this year called Hiring Our Heroes geared specifically to meeting the needs of veterans. “Express Pros has always had a high level of recognition and a high level of desire to hire veterans,” says Orozco. “We’ve done incentives over the year. We really value veterans in all levels of our company.”

There is also help available for veteran job seekers at the federal level under a new retraining program (www.va.gov/education/other-va-education-benefits/veteran-rapid-retraining-assistance) that offers education and training for high-demand jobs.

Stiener-Murphy says another tool employers can use to encourage and retain veterans in their organizations is to pair them up with a mentor or peer who is also a veteran. “There’s just an instant bond when you meet someone else with a military background.”

Hire Our Heroes is a 2021 initiative launched by international employment agency Express Employment Professionals to match employers with veterans seeking jobs. The company has a long history of supporting veterans in the workplace because of the value veterans bring to the workplace.

Daria Orozco, owner of the South Phoenix Express Pros location, says the heart of the program is in the tagline, “You took care of us. Now let Express take care of you.”

Express Pros offers jobs ranging from temporary, to part-time to full-time, which allows veterans the flexibility to transition at their own pace into a new career. Among other services, its staffing consultants help veterans translate their unique military experience into skills employers need in the civilian workplace, as well as providing resources and tools to build new skills.

Orozco notes veterans have many characteristics that employers want in their employees, such as reliability, working well with a team and understanding strategic plans.

“We reach out to several veteran organizations within the Phoenix area to let them know about our job openings,” Orozco says. “We have multiple relationships with nonprofit organizations that help veterans.”