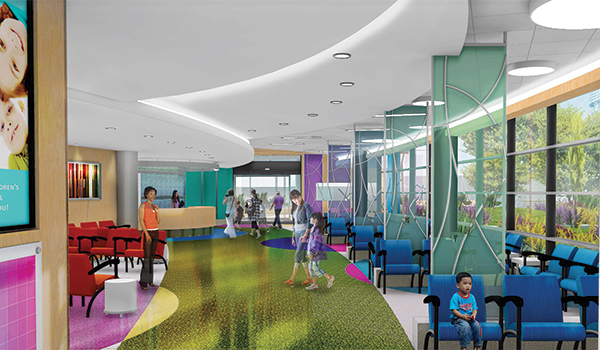 Traumatic injuries are the leading cause of death in Arizona of children between the ages of 1 and 16. Phoenix Children’s existing ED and Trauma Center were designed to treat 22,000 children annually, but more than 83,000 patients came through its doors in the last year alone, making it one of the busiest centers nationwide.

Phoenix Children’s boasts the only American College of Surgeons verified Level 1 Pediatric Trauma Center in Arizona, and it is one of only a few in the nation. “Critically injured children treated at hospitals without a Level 1 Pediatric Trauma Center fare much worse than kids treated here at Phoenix Children’s, who are far more likely to survive and even thrive,” says David Notrica, M.D., Phoenix Children’s trauma medical director. In fact, treatment at an ACS-verified Level 1 trauma center, a designation reserved for centers that provide only the highest level of care, reduces mortality rates by 25 percent. The mortality rate at Phoenix Children’s ED and Trauma Center is one of the lowest in the country. However, the space is no longer sufficient to meet the demand, especially as Arizona’s pediatric population is expected to grow to 1.5 million by 2030 from 1 million today.

The $40 million ED and Trauma Center, funded through a year-long capital campaign and scheduled to open in late 2017, will have the capacity to accommodate 100,000 patients each year. The campaign kicked off with a $10 million gift from the Kemper and Ethel Marley Foundation, the largest single donation ever received by the hospital.