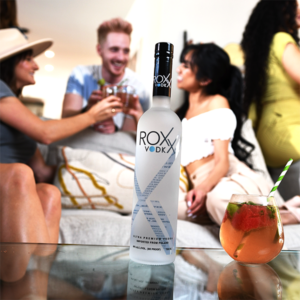 “The recipe for the vodka was unique and just amazing!” says Angela Nielsen, explaining what attracted her to founding ROXX Vodka. “I had built two other successful businesses, so my entrepreneurial spirit was definitely the motivating factor.

“I self-funded the company from 2012 to 2018,” Nielsen says. Explaining that ROXX is a vodka distilled in Poland using four pesticide free grains and has won many awards including a gold medal and 92-pt rating from Tastings.com., Nielsen shares that ROXX has been served at the Grammy’s party at the Playboy Mansion; was sponsor of the gifting suite at the VMAs; and was served to celebrities like Julia Roberts, Cindy Crawford, Adam Sandler and so many more at the ROCK4EB charity event in Malibu.

Nielsen founded the company in July 2012 but was held up for several years litigating a trademark infringement case filed by Exxon. She relaunched the brand in late 2018, just five months prior to COVID-19, and is currently distributing in the Metro Phoenix market. “The financial investment has been overwhelming but I have now found the right partners to finally grow the brand,” she says.