The Howard Hughes Corporation and Jerry Colangelo today announced the launch of Douglas Ranch, a new large-scale master-planned community (MPC) in Phoenix’s West Valley. Encompassing nearly 37,000 acres in the nation’s fastest-growing metro region, Douglas Ranch is anticipated to become one of the leading MPCs in the country, with 100,000 homes, 300,000 residents and 55 million square feet of commercial development. Residential lot sales at Douglas Ranch are scheduled to begin in the first half of 2022. The MPC was acquired by Howard Hughes from JDM Partners, led by Colangelo, David Eaton and Mel Shultz, and El Dorado Holdings, led by Mike Ingram; both companies will remain as joint venture partners with HHC on Trillium, the 3,000-acre first village of Douglas Ranch, located in the city of Buckeye, Arizona.

“The launch of Douglas Ranch is momentous news for Phoenix and the state of Arizona. We are creating a city of the future—leveraging The Howard Hughes Corporation’s development expertise to build a community with limitless potential to spur growth, business expansion, economic opportunity and innovation,” said Jerry Colangelo, sports executive, businessman, and long-time Phoenix resident whose development company, JDM Partners, is one of the largest owners of entitled land in Arizona.

“To ensure the success of Douglas Ranch, we specifically sought out The Howard Hughes Corporation for its unique capability to build exceptional communities, implement proven best-in-class practices across new platforms at significant scale, and rapidly deliver on build-to-suit opportunities to help businesses relocate,” Colangelo continued. “As we prepare to start selling homes, we are excited that Douglas Ranch has been elevated to the ranks of the Howard Hughes communities that are among the most sought-after places to live, work and thrive in the nation.” 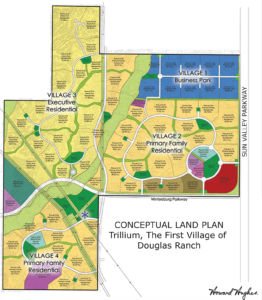 Douglas Ranch will become an industry-leading community focused on sustainable development and technological advancement which will help serve and drive the substantial growth that is taking place in the Phoenix region—which has ranked as the country’s top metropolitan area for net migration for the past three years, owing to its strong economy, low unemployment rate, business-friendly environment, and educated workforce. Phoenix has added almost a million residents in the last decade and is expected to grow by approximately 100,000 residents annually over the next 10 years. The city’s West Valley showed outsized growth in new home construction in the region at over 8% per year and captured 57% of all housing demand in Phoenix. The area is positioned for exponential growth as long- term migration of residents and businesses is projected to continue.

With this acquisition, The Howard Hughes Corporation now operates the country’s largest portfolio of large-scale master planned communities, with over 100,000 acres, including Summerlin® in Las Vegas, and The Woodlands® and Bridgeland® in the Greater Houston area, which all consistently rank among the country’s best places to live. The company also operates acclaimed mixed-use developments including Downtown Columbia®, MD, the Seaport in New York City, and Ward Village® in Honolulu.

“We are excited to partner with JDM and El Dorado to launch what will be the leading master planned community in the Western United States,” said David O’Reilly, Chief Executive Officer of The Howard Hughes Corporation. “Douglas Ranch will be a model for forward-thinking development and offer an extraordinary lifestyle built on a robust economic foundation—incorporating best practices from across our national portfolio to advance environmental priorities and technological innovations.” 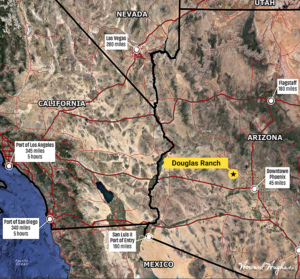 The $600 million acquisition of the 37,000-acre Douglas Ranch is a unique opportunity to add a fully entitled, “shovel-ready” MPC to HHC’s acclaimed portfolio of award-winning communities—without hindering the company’s already extensive development pipeline. With the expectation of 1,000+ lot sales in 2022, Douglas Ranch is able to replicate the self-funding business model synonymous with HHC’s other large-scale master planned communities. Further demonstrating its strong market position, HHC is equipped with ample excess liquidity available to be allocated to continue meet underlying demand across its portfolio.

“The characteristics of this community are vastly similar to HHC’s other MPCs across the country, with a prime location, strong demographics in a thriving job market, high barriers to entry, and limited competition,” added O’Reilly. “Phoenix ranks as one of the country’s most affordable metropolitan areas, and as it continues its dynamic growth as an extremely well-situated regional hub, Phoenix’s West Valley is the ideal location for people and businesses looking to thrive for generations to come.”

Douglas Ranch is projected to become home to over 300,000 residents and to emerge as a vital commercial business center as residents move into the community and growing appetites for commercial amenities create development opportunities for new diversified product types within the Howard Hughes portfolio—including single family for rent and industrial assets. It is strategically positioned in the pathway of Phoenix’s significant growth in the West Valley and has direct access to I- 10 through the Sun Valley Parkway. Additionally, Douglas Ranch is located off the future home of the I- 11 interstate which has received Congressional approval and is projected to create $30 to $60 billion of economic impact in the region. I-11 will connect Phoenix, Las Vegas, and Southern California, and eventually establish a new trade route between Canada and Mexico by way of Idaho, Arizona and Nevada.

“Douglas Ranch will be a catalyst for growth, an economic boon for Arizona, and an ideal strategic fit within our HHC portfolio,” said Jay Cross, President of The Howard Hughes Corporation. “As we shape our cities of tomorrow and deliver the new urban experiences that people and businesses are seeking today, we are designing communities with urban amenities and intelligent infrastructure integrated into expansive open settings, with convenient access to major metropolitan cities. This transaction presents an opportunity to implement impactful ESG initiatives to support the community and promote renewable practices. The Howard Hughes Corporation is defined by our steadfast commitment to the master planned communities we develop and operate, and we are thrilled to include Phoenix as a place we call home.”

The Howard Hughes Corporation owns, manages and develops commercial, residential and mixed-use real estate throughout the U.S. Its award-winning assets include the country’s preeminent portfolio of master planned communities, as well as operating properties and development opportunities including: the Seaport in New York City; Downtown Columbia®, Maryland; The Woodlands®, The Woodlands Hills®, and Bridgeland® in the Greater Houston, Texas area; Summerlin®, Las Vegas; Ward Village® in Honolulu, and Douglas Ranch in Phoenix. The Howard Hughes Corporation’s portfolio is strategically positioned to meet and accelerate development based on market demand, resulting in one of the strongest real estate platforms in the country. Dedicated to innovative placemaking, the company is recognized for its ongoing commitment to design excellence and to the cultural life of its communities. The Howard Hughes Corporation is traded on the New York Stock Exchange as HHC.