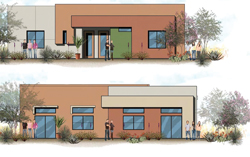 The new development that broke ground in March at Alma School and Pecos roads represents a planning change by the City of Chandler’s economic development department. Because the city was already considering whether to change the zoning on some properties — and what to change to — as a result of the recently completed “4-Corner Retail Study,” Chandler was open to developer Michael Pollack’s application to rezone the Alma School/Pecos property from commercial to multi-family.

“I originally bought this piece of land seven years ago with the intention of building a retail center, and then, as time went on, too many shopping centers went up around it and I believed we really didn’t need any more shopping centers built along the Alma School Road corridor. So I felt the highest and best use for this Alma School property should be multi-family,” says Pollack.

Jeff Kurtz, planning administrator for Chandler, says, “It provides housing opportunity that does not already exist.” Pollack, who is involved in a similar rezoning project for another property at the same intersection, sold the property to Tucson-based Aerie Land Development, L.L.C., whose plan Pollack describes as “a creative, one-story, low-density, multi-family housing plan.” Comparing the housing to casitas, Kurtz notes that, even though they are market-rate rentals, “they are all individual buildings, with no one above, below or next to” each unit.

Kurtz observes the property is undersized for traditional shopping centers and that there was overcommercialization along Alma School Road. The new project not only “takes away from the overcommercialization,” he says, “it supports existing commercial in the area” by bringing greater population density.