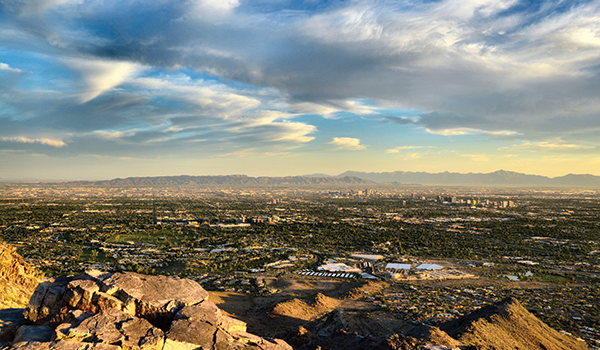 In Arizona, real estate is a sector that can both be a barometer to our local economy and react to what is happening on the economic scene nationally. The luxury market has proven to be a tested barometer over time, and the recent statistics demonstrate that economic influence can have an effect. We worked with Walt Danley Realty and The Cromford Report to provide data of the market in the Northeast Valley to see trends and provide insight into the luxury market trends. Luxury properties span the Valley in gated and non-gated communities, and include horse properties and golf properties.

Looking at trends over a longer time frame, the luxury market in the Northeast Valley can be volatile when measured on a monthly basis. According to Walt Danley Realty’s most recent market summary, the 12-month moving average hit a low point on two occasions: in August 2011 and in February 2012, both around $219 per square foot. Over the past three years, we have seen a steady move upward to around $270 per square foot, which is an increase of 23 percent above the low point. However, September saw the largest monthly drop since 2011 and was followed by another decline in October. The six-month moving average hit its low point of $215 in December 2011 and peaked at $273 in February 2015. Since then, it has declined to $258. The three-month moving average moved from $213 in August 2011 to reach a peak of $275 in June 2015. Since then, it has fallen 9 percent to $250. The market has seen a strong upward trend in luxury home prices over the last three years. However, the trend broke during the third quarter of 2015 primarily due to a dramatic shift away from high-end multi-million dollar homes. Lower-end luxury homes are still selling well but, because they sell for a lower price per square foot, the short-term average has fallen to its lowest point since August 2013.

Also in the Northeast Valley, the supply of active listings priced above $500,000 rose strongly during October, as it does most years. On November 1, there were 2,815 offered for sale, up 15 percent from the 2,453 seen on October 1. This is a similar percentage rise to last year and leaves 7 percent more active inventory than on November 1, 2014. Ninety-seven percent of active listings are normal with 56 short sales and 15 lender-owned properties. Over the last month, the supply of homes rose the most (19 percent) between $1.5 million and $2 million, while the supply of homes between $600,000 and $800,000 rose the least (8 percent).

Walt Danley Realty anticipates future sales by looking at homes under contract. The number of listings under contract was 357 as of November 1, which is down 43 from last month but 10 percent higher than November 1, 2014. The number of listings under contract rose between October and November last year, so this year’s decline is a sign of a weakening trend in demand. The segment between $500,000 and $800,000 is showing the strongest growth (up 30 percent from last year); in contrast, the range above $800,000 fell by 12 percent. Normal sales comprise 90 percent of luxury homes in escrow, up from 87 percent 12 months ago.

The pricing for homes under contract was at a low point of $165 per square foot in September 2011. Up to the end of March 2014, it was advancing and reached a peak of $257. Between March 2014 and November 2015, it made no consistent moves in either direction but stood at $250 as of November 1, 2015. This decline is partly due to the high growth in homes under $1 million that are under contract, with no corresponding increase in the more expensive homes. The average under-contract price for normal listings is $257 per square foot. The average for (the very few) lender-owned homes is $211 per square foot, and short sales average $180 per square foot.