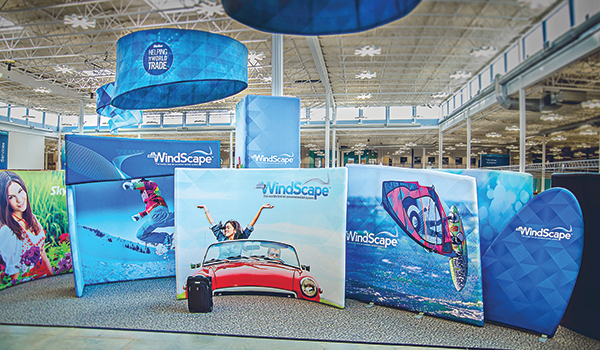 Air is what powers Skyline’s breakthrough exhibit system called WindScape. Fabricated with a bladder system that creates the framework, WindScape inflates in three to four minutes. It also offers the convenience of being lighter-weight than traditional exhibit systems. Where a traditional 10-foot backwall will weigh 60 to 80 pounds, a 10-foot WindScape backwall weighs about 20 pounds — with case, about 30 pounds — and pack compactly for transport and storage.

WindScape earned Phoenix-based Skyline Southwest the People’s Choice Award this past March at EXHIBITOR2014, the largest trade show for trade-show manufacturers. David Byram, the company’s managing director, says WindScape “has exceeded our wildest expectation of reception in the marketplace” since the company introduced it in August last year.

The 10-foot backwall system, which Byram says is Skyline’s No. 1 product, is one of WindScape’s 46 different shapes and sizes available. Among the others are cylinders and rings that hang from the ceiling and 16-foot and 18-foot towers that allow an exhibitor to get signage above without rigging to the ceiling. The WindScape exhibitor system can be as small as a tabletop display or a full-sized, four-sided conference room with a door opening. Graphics can be single- or double-sided, and fit like a pillowcase over the frame, zipping at the bottom. “Exhibitors can change out the graphic as much as they desire,” Byram says. Stored with the frame, the graphics are produced on what Byram describes as “material that minimizes the wrinkles” when the display is inflated.