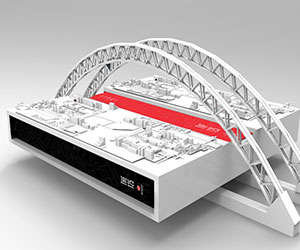 “In construction, we’re bidding the concept of what we can deliver,” says Jeff Perelman, senior vice president and chief growth and strategy officer of Sundt Construction, Inc., explaining the advantage of 3-D over 2-D is “it’s hard to go from a two-dimensional piece of paper to give people a sense of scale of what you’re building.” Building a model rather than simply producing a rendering is nothing new in construction, but, Perelman notes, while an architect may spend a year or two iterating a few designs, a contractor may have only two to four weeks for the bid process — which is not enough time to send out to a modeler. Perelman is looking at 3-D printing to fill that need.

The debut endeavor for Sundt’s new 3-D printer was a special cover for the book Sundt produced for its recent 125th birthday celebration to showcase many of the company’s significant projects. Sundt’s engineers developed the “Sundt City” and bridge design from the 3-D concept proposed by WHYFOR Design. In addition to heightening the visual impact of the book, it provided a non-critical opportunity to practice with the printer prior to using it on a bid.

Perelman shares that the 3-D printing process was much slower than anticipated, and working in a single color is another shortcoming. But it is effective in showing scale and proportion. And Perelman believes a 3-D print can be valuable in some bidding circumstances, including providing a visual reference for the narrative in the bid document. When bidding to be part of the design team on a project when the developer or owner is looking to balance the creativity of the architect with the contractor’s practicality and knowledge of constructability, “you’re bidding your qualifications,” Perelman explains. “A visual image would be wonderful,” enabling the contractor to submit not just cost to build but actual design ideas. Also, for highly technical projects — such as a processing plant or water treatment plant — or in a live environment with complex flows of piping for, for instance, chemicals, water and air, it could be advantageous to print key sections “so they can see that we understand the complexity of building their project.” And for building a road, “We can print the configurations of different months in sequence,” to determine how to sequence the project for the least disruption of traffic.

Sundt’s bid process already includes creating a 3-D rendering in a computer to pressure-test a project’s sequence, design, schedule and material count, making it relatively easy to go to the next step of programming a 3-D printer.

“It’s taken us months to learn what we can do with the 3-D printer,” says Perelman of the practice Sundt has had on the book project. But he believes it is important to start early in learning to work with it, as he sees valuable applications in the future. “Some structures have custom pieces, such as plumbing and piping in a complex industrial environment. And if it can handle specific metals, it can be used for key componentry,” he says. It may even be used for printing bigger pieces of structures on a job site, rather than pouring.

“Once you start with the technology, the engineers can make it work,” Perelman says. “We want to be on the leading edge of where 3-D printing will show up in actually building buildings.”