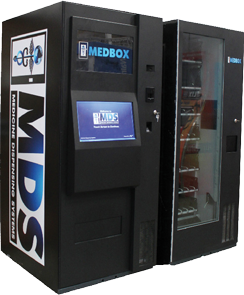 The emerging and high-profile marijuana industry — medical and otherwise — has provided a big boost to a company whose technology was initially patented for broad-scope use across the traditional pharmaceutical industry. Medbox is a biometrically controlled dispensing and storage system into which pharmacy staff places the prescribed drug and from which the patient retrieves it after paying and verifying identity at an ATM-style kiosk.

The system “was tailored to fit the many rules of the marijuana legislation in California, to be the most compliant way to operate,” says CEO Bruce Bedrick, M.D. “That got us a name and a foothold.” And, he adds, because people looked to them for their expertise — based on having the technology — “we became medical marijuana consultants to the industry.”

Bedrick, a Scottsdale physician who had been a licensee of the system, became CEO of Medbox in 2011 and helped take the company public. A year later, after the states of Colorado and Washington passed a recreational marijuana law and the Wall Street Journal ran a story on Medbox, the company saw its stock price jump from $2-$4 per share to $215 per share.

In addition to dispensing the prescriptions, the system can generate coupons and other promotional reminders, offering retailers targeted marketing opportunities. “The technology is focused on retail pharmacies, and can fully integrate into what they’re doing,” says Bedrick, who describes the company’s current connection to marijuana dispensing as “priming the pump and laying the foundation to make headway in traditional pharma.”