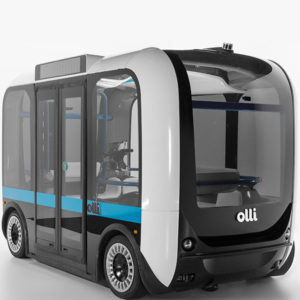 Another first of its kind, this fleet challenge invited municipalities, campuses and designated districts to propose a short-term, local use for Olli, the world’s first co-created, self-driving electric shuttle. The idea behind the fleet challenge is to find the best use scenario for the shuttles, which may include a closed professional campus, a designated district such as an entertainment or sports complex, or a large healthcare complex. Phoenix and California state capitol Sacramento get first honors to deploy a test fleet of two eight-person shuttles, the specific winners yet to be announced as of press time but promised by the end of this year; the second fleet challenge will be open to Australia and the Nordics, where Autonomous Mobility is Olli’s exclusive operator and reseller for that region and the Baltic area, with additional challenges to follow in the coming months.

“We look at the winners as partners in this integration of technology. … Local Motors is constantly looking to its community members for ideas, thoughts, requests, et cetera to be able to update and integrate new technologies that enhance products, just like Olli,” says Brittany Stotler, vice president of marketing and communications.

Jay Rogers, Local Motors’ CEO and co-founder, announced the start of the challenge in September while attending ITS (Intelligent Transport Society) World Congress in Copenhagen, Denmark, where Olli offered rides to attendees and dignitaries throughout the conference as it had done at the International Manufacturing Technology Show in Chicago the previous week.

In early August, Olli was deployed at the University at Buffalo as part of a partnership with the school and the State of New York. The shuttle is being used on campus for mapping, autonomous education and to test potential transportation options.

Local Motors manufactures its open-source designs in low volume at multiple micro-factories, one of which is located in Chandler.