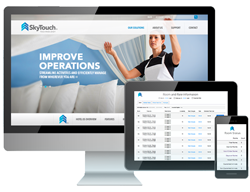 Sparked by popular demand, Choice Hotels recently rolled out for public use the software program it initially developed for its own hotel management system. In fact, it created an independent division for the endeavor — SkyTouch Technology, based in Phoenix — and, according to SkyTouch president Ric Leutwyler, “became our first customer.”

Choice decided to create SkyTouch as an independent business division when other hotels, seeing how well it worked for Choice, expressed interest in acquiring the software for their use. Its biggest advantage over other property management programs is its flexibility of operating with a Web browser rather than tying a user to a specific desk, explains Leutwyler. “You can do anything from any computer anywhere,” he says of the property management system that handles reservations, guest stays and rates on any device with an Internet connection. Plus, there is a lower cost because “not all the software apps are actually on the computer.” It also takes into account the need to be able to bring employees up to speed quickly, an issue because critical customer relations positions such as front-desk clerk experience high turnover. “They want something [the employee] can learn quickly and do without looking down; [rather,] look heads up and make eye contact with the guest,” says Leutwyler, noting, “It was designed by a hotel for a hotel, so it’s intuitive.”

Started with about 75 people from Choice Hotels, SkyTouch now employs 130 and Leutwyler sees it continuing to add employment here. The technology solution is now in use at more than 5,500 Choice and non-Choice hotels in eight countries. Noting the “tremendous pool of talent here” in the Phoenix area, Leutwyler says SkyTouch is looking to evolve other ways to serve the hospitality industry as well as apply the same capabilities to other markets, such as retirement facilities and student housing.