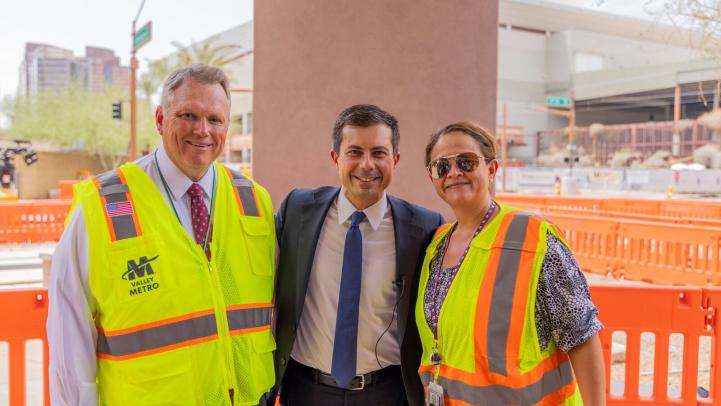 CEO Scott Smith recently informed the Valley Metro Boards of Directors of his intent to retire after serving as the agency’s chief executive for the past five and a half years. Smith shared that he would not seek to extend his current contract, which expires at the end of this fiscal year.

“As an organization, Valley Metro is as healthy and strong as I’ve ever seen it,” said Smith regarding his decision. “Over the past few years, we have obtained hundreds of millions of dollars in federal grants for our rail system, have several significant projects under construction and have weathered the storm of the pandemic to provide safe and efficient transit to our region. I’m ready to move on to the next chapter in my life and turn the keys over to new leadership. At Valley Metro, we are committed to connecting communities and enhancing lives, and I am confident that this team will continue to provide strong leadership to that end. I’m very optimistic about the future of the organization and transportation in the Valley.”

Smith joined Valley Metro in February 2016 as the interim CEO and was asked to remain as CEO in November of that same year. During his tenure, he helped stabilize the organization, restore Valley Metro’s reputation and lead the agency to new heights. Under his leadership, Valley Metro has achieved a strong financial and audit track record and operates its bus, rail and paratransit services more efficiently and at a lower cost than its peer agencies. Valley Metro completed two major capital projects during his tenure – the Gilbert Road Light Rail Extension in Mesa, AZ and the 50th Street/Washington enhanced ADA rail station in Phoenix, AZ – and received approval of a $530 million federal discretionary grant for the South Central Extension/Downtown Hub light rail project, which is currently under construction. Work has also begun on a rail extension in northwest Phoenix and its application for $160 million in federal funding is in its final stages of approval. Smith has also led the creation of an innovative and collaborative organizational culture that has increased efficiencies and fostered new ideas for the future of transit in the Valley of the Sun.

“We are grateful for Scott’s leadership during the past five plus years,” said Valley Metro Board Chair and Mesa Councilmember Francisco Heredia. “He’s provided steadfast leadership, innovative planning and has been an effective advocate for transit, infrastructure investments and sustainable development in our region, across our state and at the national level. Filling Scott’s shoes will be a tall task. Valley Metro’s thousands of daily riders and the entire community who benefits from our regional transit system have the Boards’ full commitment to find the next chief executive who can carry the agency forward in this exciting era of transportation investment and growth.”

In order to provide ample time for a smooth transition, the Valley Metro Boards of Directors have initiated the CEO search and recruitment process. The Boards have begun the process of retaining an executive search firm to spearhead a nationwide search for Smith’s successor.