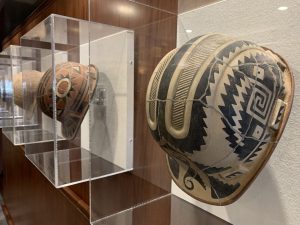 While not generally known as a collector of fine art, Salt River Project (SRP) actually boasts an impressive collection with dozens of important pieces. Over the past several decades, SRP, the nation’s third-largest not-for-profit utility, has purchased artwork that helps tell the story of power and water.

Until recently however, much of the collected works sat in storage or were placed in remote areas of the company. Without identifying signage or an educational component to the collection, many notable pieces were simply overlooked. Treasures waiting to be rediscovered.

“We have some huge names in the art world right now, and we had the foresight to commission art from them when they were rising stars,” said SRP senior community outreach representative Ileen Snoddy. “With such one-of-a-kind pieces, we realized we had to do something more with the collection.”

That changed when SRP recently began a remodel of its Tempe administration building that included the purchase of new art pieces. Snoddy enlisted the help of James Burns, Executive Director of Western Spirit: Scottsdale’s Museum of the West, and the pair launched an effort to develop an inventory of SRP’s art collection. With assistance from three Arizona State University students, a catalog of the collection was created.

“Under our guidance, the students examined the artwork, created reports on their condition, photographed them, researched the artists and found out where their art is on display or has been on exhibition in galleries throughout the world,” said Snoddy.

In a three-phase effort, the team is first working to inventory all 142 pieces at SRP’s Information Services Building (ISB) to have them appraised. Next, they’ll assess the art collection and curate an exhibit in the changing gallery space in the Heritage Center located at SRP’s administration building. Finally, SRP will share the art collection with the community sometime in 2024, where Snoddy says it belongs.

Most-Expensive Pieces (at the time of purchase):
Three Ways to the Salt River by Eric Orr
Dream Cave of Time Regained by Michelle Stuart
The Mission by Ansel Adams

Cutting-edge Chicano Pop Art:
The Howl by Luis Jimenez
Going to the Corn Dance by Frank Romero
Mystery at the Park by Carlos Alamarez