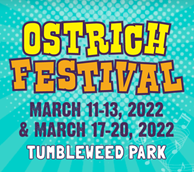 The 32nd annual Chandler Chamber Ostrich Festival announces the attractions and rides to the first-ever two-weekend festival. The event will take place two consecutive weekends, March 11-13 and March 17-20, and will include a special St. Patrick’s Day themed celebration on Thursday, March 17, at Tumbleweed Park in Chandler. Attractions to include:

PAW Patrol will make their return to the Chandler Chamber Ostrich Festival. These heroic pups, who believe, “No job is too big, no pup is too small!”, work together to protect their community. Your favorite pups including Chase the Police Pup, Marshall the Firedog, and Skye the fearless one are ready to make their way back to the Chandler Chamber Ostrich Festival. Do not miss this PAWsome opportunity to meet your favorite pups.

This traveling science museum features dozens of interactive and visually captivating displays and activities. Many of the displays in this exhibit are STEM (science, technology, engineering, and mathematics) based and involve critical thinking, problem-solving, and teamwork.

Professor Smart’s Science Show is fun for both kids and adults. Even the youngest kids will be engaged by the juggling, the comedic physicality of the performer, and the tempo of the show. Professor Smart is accurate, funny, lively, and uses many volunteers.

Pangaea Land of the Dinosaurs will return again this year and will include more “adventure” type activities like a climbing wall, water walking balls, bungee trampoline, etc. Tickets are $1 each or $20 for 25 tickets.

This attraction is a high flying, high energy, and high dive show featuring the legendary Sinbad, world traveler, and diving expert. The show’s storyline follows Sinbad’s mission to go to the Island of Cyclops to recover the stolen treasure belonging to the king. Sinbad and his valiant sailors face several obstacles while on a mission to entertain spectators of all ages.

WaterBark is a high-energy, acrobatic show featuring dogs and humans performing on the same stage/pool that all families will enjoy. The unique and spectacular show will be one you won’t want to miss.

This is an interactive, learning experience that will bring kids face-to-face with “radical” reptiles including a 14-foot python, a giant tortoise, and a Monitor lizard. Smaller reptiles will also be featured at this show for kids to touch and hold.

Wall To Wall is a high-energy trampoline display showcasing former cirque performers high flying through the air on a 2-story trampoline structure. This double trampoline-wall show features out-of-this-world acrobatics mixed with comedy in its construction theme.

Loop Rawlins is a one-man Wild West show that features traditional Western skills of rope spinning, whip cracking, and gun spinning in his high-energy performances, which are choreographed with edgy pop and country music.

Children and families can see their favorite childhood stories come to life during Storybook Time. Special guest readers will read childhood favorites, along with real-life book character special appearances, and photo ops. Characters that will be featured include Curious George, Give a Mouse a Cookie, Biscuit, Elephant Gerald & Piggie, Frog & Toad, Wild Thing, and Splat The Cat.

Pig races have long been an attendee favorite at the Ostrich Festival. These curly-tailed friends will race up to four times a day.

The duck races will have attendees select their favorite ducks at the start of the show to release the ducks on the water race track. Prizes are given to the winners of each race. Each show will include five different races.

The USA BMX/Monster Energy stunt show features the world’s most extreme bicycle stunt riders in a spectacular, non-stop, action-packed show. These professional riders use half pipes, quarter pipes, and box jumps to ensure a spectacle for their crowds.

Chandler Warrior Zone will feature several attractions including their Boot Camp Challenge, Face to Face Climb, Adrenaline Rush, and Ninja Ladder Challenge where kids and adults can test their agility skills. The stage will feature demonstrations by local ninja and karate schools.

Mango and Dango perform a one-of-kind theatrical circus show. Which includes partner acrobatics, juggling, aerial arts, stilt walking, physical comedy, mime, chair stacking, and more. They specialize in both stage and street shows and provide a variety of entertainment and cirque-style performances that engage spectators of all ages.

BOOM! Percussion is a high-energy drum line that has performed in festivals and parades nationwide. Their colorful uniforms and LED suits will engage audiences of all kinds.

Come and meet the infamous Ostriches of the Chandler Chamber Ostrich Festival. Ostriches will be roaming freely in their designated Ostrich viewing area.

Tickets for the 32nd annual Chandler Chamber Ostrich Festival are on sale now at OstrichFestival.com. All 2020 and 2021 purchased tickets will be honored on the new March 2022 dates.