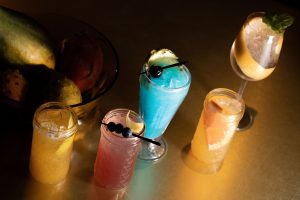 Phoenix’s favorite live music cocktail lounge, The Womack is reopening this December with a welcoming new indoor-outdoor layout, fresh new food & drink menus, and a killer lineup of live music and entertainment hosted nightly. Kicking off on Thursday, December 2 with four straight days of live local music and DJ sets, The Womack is also partnering with famed pop-up restaurants, such as Good Boys and The Barter, to bring the Valley’s best eats right to the parking lot (full details below). Now open Tuesday – Saturday from 4 pm – 2 am and Sundays from 11 am – 6 pm, the Womack is also launching an all-new Sunday Drag Brunch featuring raucous entertainment by The Gender Outlawz, and hosted on the newly expanded indoor-outdoor patio, starting on December 5 (11am – 3pm).

Leading the refresh for Genuine Concepts is Richie Sullivan, new Womack GM and a longtime wine and hospitality pro, who handcrafted the refreshed food and drink menus. Highlighted by an all-new menu of intricate yet crushable Japanese-style craft cocktails, the Womack also features exclusively all-natural wines, and exclusively Arizona-brewed craft beers, such as Wren House, AZ Wilderness, Tombstone and more. “As a sommelier I wanted to add more complex, interesting natural wines, and Arizona is currently a hotspot for natural wines, so we wanted to highlight that as well,” Sullivan says.

Brimming with chef-crafted bar bites, such as Stuffed Mushrooms, Deviled Eggs or Meatballs with marinara, the Womack’s in-house kitchen also serves up an expanded selection of vegan and vegetarian dishes. Plus, the space itself was completely revamped, including a state-of-the-art sound and lighting system, blowing out the front façade to create a seamless indoor-outdoor space, and bringing the live music right out onto the dual outdoor dining patios.

“From the upgraded sound and lights, to the refreshed interiors and patio, to our new parking lot pop-ups and Sunday Drag Brunch, every part of the new Womack has been designed to create a new, community-centric model for today’s live entertainment venues,” says GM Richie Sullivan. Also a musician who’s currently co-writing an opera, Sullivan is excited to bring a mix of old and new to this classic Phoenix hangout, created as a salute to the long-lost live music cocktail lounge, Chez Nous. In fact, the Womack was fondly named after Chez Nous founders, Andy and Maureen Womack. “We’re proud to be home to one of the best Jazz and R&B scenes in the country, and look forward to bringing in more varieties, such as Afro Beat, Latin and other World music, plus comedy and slam poetry. We’ve even partnered with Phoenix’s own, Recordbar Radio to showcase the Valley’s best DJs, with an emphasis on vinyl-only sets, alongside the highly-anticipated return of the local legend, the Roscoe Taylor band.”

Genuine Concepts, co-founded by Tucker Woodbury and Jim Riley, has a rich history of creating unique environments that quickly become neighborhood-defining hangouts. What began with The Vig Arcadia, has grown into a collection of hyper-local, community-driven restaurants and bars packed with genuine people, serving genuine food and drink.