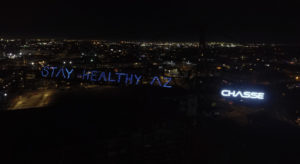 Starting today, Valley drivers may have noticed something up in the sky. It’s not a bird. It’s not a plane. It’s not even Superman or Santa just yet. It happens to sparkling lights strung up to a tall crane on Fourth Avenue and Fillmore Street in downtown Phoenix. Locally owned and operated CHASSE Building Team decided to put up these lights – which spell out STAY HEALTHY, AZ – over the weekend, which will stay on well into the new year to help make the season right now a little more merry and bright but also to make sure we are all still being diligent about taking care of ourselves and each other as we move past 2020 into the new year.

An essential business, CHASSE has remained diligent in all CDC-recommended protocols to ensure the general contractor can safely continue to help quite literally build Arizona.

“We put a COVID-19 task force together very early on to assist with everything from mobile handwashing stations, jobsite signage including all of our requirements, well-checks and more,” says founder Barry Chasse. “As a result, we completed some pretty impactful things this year for Arizona. We are especially proud of completing the build of Heidi’s Village, which is a first of its kind animal sanctuary in Midtown, as well as several schools including Wood Elementary School and Creighton Academy, among others.

CHASSE also broke ground on some big projects, including the new John McCain Elementary School planned for the West Valley and a big update to Hohokam Elementary in Scottsdale.