Largest Indoor Pickleball Facility in the Country Opening in Chandler

The fastest growing sport in America just got better 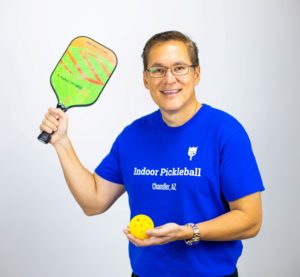 Pickleball Kingdom announced that it will be opening the first dedicated indoor pickleball facility in Arizona and the largest in the United States in the first quarter of 2022.

“Chandler’s entrepreneurs are thriving and we are ecstatic over the announcement made by Mike Rodrigues that Pickleball Kingdom is opening in Chandler,” stated Mayor Kevin Hartke.  “Sixteen pickleball courts dedicated to indoor recreation is a win for Chandler residents.”  – Chandler Mayor Kevin Hartke

“Pickleball is the fastest growing sport in America because it’s fun.  What’s not fun is waiting for a court, playing in the heat, and having the wind affect your game.  We’ve solved all those problems.“   – Mike Rodrigues, Founder of Pickleball Kingdom

Features and benefits of Pickleball Kingdom include…

Pickleball Kingdom will be located in Chandler on the NE corner of Ray and Rural.  Its mobile app will allow members and visitors to reserve courts and sign up for tournaments and leagues.

The idea for Pickleball Kingdom was birthed on January 9, 2021, as Mike Rodrigues and his buddies were standing in the sun on a windy day waiting for a pickleball court to open up.