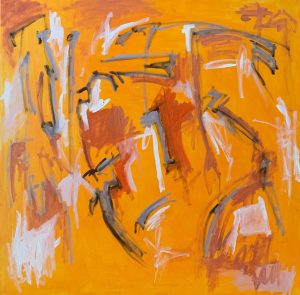 Ron Carlos, a member of the Salt River Pima-Maricopa Indian Community, co-curated the exhibition, and his pottery will also be shown. Carlos makes his traditional pottery with the “paddle-and-anvil” technique indigenous to the Maricopa and Pima tribes of southern Arizona.

“This exhibit is a blending both traditional and contemporary Native American art,” Carlos said. “You can see some of the more traditional art forms from a few of our artists as well as work by artists that have taken traditional elements and created art that expresses the continuum of Native American culture in modern American society.”

In this exhibition, Scottsdale Arts is honored to share work from artists who descend from the first peoples, the indigenous Americans with histories that stretch through the millennia.

Wendy Raisanen, curator of collections and exhibitions for Scottsdale Public Art, said she has been interested in local Native cultures from an early age.

“I grew up in Scottsdale, and all our grade schools were named after Native American tribes,” Raisanen said. “There are 22 tribes in Arizona, but this show has people from tribes all over the United States and Canada. The material culture of Native Americans has such a deep history, and it’s exciting to show how this is revealed in the artwork we’re showing here.”

In addition to the exhibition itself, there are a few events associated with the show, including an opening reception from 10 a.m. to 11:30 a.m. Feb. 11 at the Civic Center Public Gallery inside Scottsdale Civic Center Library, 3839 N. Drinkwater Blvd., Scottsdale, Arizona 85251.