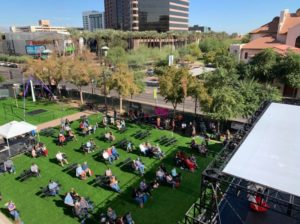 The Herberger Theater Center is excited to announce its new Art of Celebration Concert Series featuring five concerts on The Pavilion, its new outdoor stage. Throughout the months of March and April, the Herberger Theater will present Dennis Rowland & Diana Lee, The Stakes, Phoenix Afrobeat Orchestra, HÄANA, and the Alice Tatum Band.

“The concert series is one of the exciting ways we are continuing to offer diverse arts experiences to our community in this trying time,” said Mark Mettes, President and CEO of the Herberger Theater. “By hosting this wide range of music genres at The Pavilion, we hope to invite new guests to the space and welcome current guests to return.”

The concert series kicks off on March 20 with Dennis Rowland & Diana Lee. The dynamic jazz duo brings their popular music to the Herberger Theater for a night of exceptional jazz. Known around the world for his talents, Dennis Rowland has shared the stage with greats such as Sarah Vaughan, Ella Fitzgerald and Tony Bennett during his time with the Count Basie Orchestra. His main strength rests with his swinging style and appealing voice. Born and raised in the ‘Valley of the Sun’ Diana Lee has found her inspiration through instrumentalists, vocalists and music of all genres. To hear her is to be seduced by her true unique interpretation.

To begin a three consecutive concert weekend, The Stakes take the stage on March 25. Billed by the Phoenix New Times as “the premier live hip-hop band in town,” The Stakes have become an institution in Arizona’s local music scene. The band reflects the diverse colors and experiences of the young and the revolutionary, with a realism and authenticity that brings together their unique brand of hip-hop. Opening for The Stakes is Sassy and the Sneak Attack.

On March 26, Phoenix Afrobeat Orchestra takes the stage to a sold-out audience. Phoenix Afrobeat Orchestra (PAO) proudly carries the musical and social torch that was first lit by the powerful duo of Fela Kuti and Tony Allen, original inventors of the Afrobeat sound. Led by funky heiress Camille Sledge, the 16-strong orchestra is comprised of the most ambitious and outrageous musicians in Phoenix today – making it the hottest super-group on the hot city scene!

Finishing the weekend trio on March 27 is HÄANA. HÄANA is a one-woman orchestra, combining music + tech + art with Nordic/Icelandic influences set to a broken beat, often featuring avant-garde ballerinas in her stage shows, including her newly released music video GOLD. Her original productions are like a dynamic film score. HÄANA counts Massive Attack, Björk, and Trentemøller as influences in crafting her sounds, featuring electronica influences, synthetic sonority, and vocal textures. The resulting sonic palate takes listeners on a journey whose destination is a crossroads between classical and contemporary, organic & man-made, familiar and mysterious.

Concluding the series is the Alice Tatum Band featuring Brian Page. Alice Tatum is an award-winning and critically acclaimed singer who has been a fixture on the Phoenix music scene for more than 30 years. She is an accomplished jazz vocalist and excels in pop music genres. Tatum has performed with greats such as Michael McDonald, Tom Scott, The Righteous Brothers, Bonnie Raitt, Alice Cooper, and Nancy Wilson.

The concert series scheduled on The Pavilion is part of The Art of Celebration series, which focuses on celebrating community and creativity in the space. From festivals and concerts to fully staged productions and performances, The Art of Celebration unites artists and audiences through diverse experiences that ignite emotion, stimulate conversation and inspire connections – all while following safe and healthy protocols related to physical distancing, face coverings and cleanliness. The Herberger Theater also continues to present a series of free Performance Pop-Ups by local performers and organizations.

The continued health and well-being of guests, artists, volunteers, and staff is of the upmost priority. Cleaning procedures will be in line with CDC guidelines for gatherings, as well as state and local ordinances. All surfaces will be completely sanitized between performances and high contact surfaces will be cleaned frequently. Face coverings will be required at all times within the venue for guests, volunteers, and staff. At the outdoor performances, guests will be seated six feet apart from other patrons, as well as space to socially distance throughout the venue. Signage will be posted throughout the outdoor space to remind guests to socially distance and follow safety procedures. More information about enhanced safety procedures can be found at HerbergerTheater.org/Covid-19-Protocols/.

Tickets can be found here.

The Herberger Theater is a 501(c)(3) Arizona non-profit organization that supports and fosters growth of the arts in Phoenix as the premier performance venue, arts incubator, and advocate. Opened in 1989 and fully renovated in 2010, the Herberger Theater offers three theater venues, art gallery, plaza, and rentable event space for a variety of community uses. The Herberger Theater hosts a diverse range of dramatic, dance and musical performances; is home to local theater and dance companies; its gallery provides a venue for Arizona artists to present their works; and a plaza that hosts civic and arts events. Proceeds from annual fundraising benefits its Youth Outreach Programs, designed to give Arizona children (ages 3-19) opportunities to excel, learn and heal through experience with the arts. Over the last 31 years, four million patrons have enjoyed more than 16,000 performances at the Herberger Theater.