‘Hamilton’ Stars to Perform in Scottsdale

Javier Muñoz and Mandy Gonzalez will perform Sept. 24 in “Hitting New Heights” at Scottsdale Center for the Performing Arts 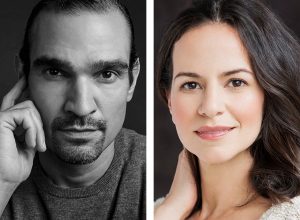 Javier Muñoz and Mandy Gonzalez, the Broadway stars of “Hamilton” and “In the Heights,” will join voices on Sept. 24 at Scottsdale Center for the Performing Arts in a special performance.

Titled “Hitting New Heights,” the show will celebrate Broadway’s hottest composers, from Stephen Schwartz to Lin-Manuel Miranda. Songs from “Wicked,” “Hamilton” and more will be part of this tour-de-force concert event.

Muñoz is an actor and activist whose impressive body of work spans theater, film and television. He is best known for starring as Alexander Hamilton in the cultural-phenomenon musical “Hamilton” on Broadway for two years, after Miranda departed the show (and he was Miranda’s alternate prior to that). He got his break starring as Usnavi in “In The Heights” on Broadway, also created by Miranda.

Gonzalez is an accomplished film, television and stage actor and author. She starred on Broadway in “Hamilton” as Angelica Schuyler. She also originated Nina Rosario in the Tony Award-winning “In The Heights,” for which Gonzalez received a Drama Desk Award. Gonzalez also starred as Elphaba in the Broadway production of “Wicked,” blowing the roof off New York City’s Gershwin Theatre each night as she belted out the signature song, “Defying Gravity.”

“Not only will these artists grace our stage, but they have invited students from Desert Mountain High School to perform with them and are leading a public masterclass for our community,” said Diandra Adamczyk, senior programming coordinator at Scottsdale Center for the Performing Arts. “This show will be flooded with talent, heart and soul. I can’t think of a better show to kick off our fall season!”

The masterclass with Gonzales and Muñoz will take place at 10 a.m. Sept. 24, prior to the concert that evening. Masterclass participants will break down their song material with one-on-one coaching and will also have the opportunity to be part of a Q&A with both Gonzalez and Muñoz. The class is designed for advanced/college level performers, and limited space is available.

On the television side, Muñoz has appeared on Freeform’s “Shadowhunters,” “Blindspot” and “Full Frontal with Samantha Bee.” He also voices a lead character on the Disney Jr. animated series “Eureka!” Muñoz also appeared in the Paramount+/MTV Films feature “Three Months” and recently starred in the indie feature “Monuments” by Jack Newell, which took home several awards on the festival circuit.

Television viewers have seen Gonzalez in her recurring roles in the hit series “Madam Secretary” and “Bull” and alongside Steve Martin and Martin Short in “Only Murders in the Building.” Equally at home on the big and small screen, she has appeared in “Across the Universe,” “After” and “Man on a Ledge.” Gonzalez can also be heard as the voice of Mei in Disney’s “Mulan 2.” A recording artist and author, Gonzalez’s debut album, “Fearless,” debuted at #13 on the iTunes pop charts and her young adult novel series, also “Fearless,” is published by Simon and Schuster.

Both performers are also humanitarians. Muñoz is an outspoken activist for LGBTQ+ rights and a Global Ambassador for (RED), which fights to end HIV and AIDS. And Gonzalez is the founder of #FearlessSquad — a social media movement for inclusiveness and positivity.

Scottsdale Arts is continually striving to increase our accessibility offerings to provide enriching arts opportunities for everyone in the community. For more information about services we offer, please visit ScottsdalePerformingArts.org/visit/accessibility.