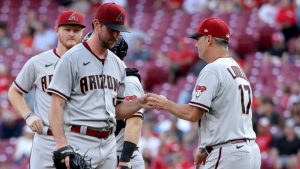 The Arizona Diamondbacks will kick off summer starting Monday with 11 home games in 17 days over 2 homestands from June 13-19 against the Cincinnati Reds and Minnesota Twins and June 24-29 with visits from the Detroit Tigers and San Diego Padres.

The homestand gets started on Monday, June 13 with the D-backs honoring Lou Gehrig Day in support of the fight against ALS. The team will recognize individuals, families and doctors from the Muscular Dystrophy Association and the ALS Association Arizona Chapter; a patient will give a powerful reading of an excerpt from Lou Gehrig’s “Luckiest Man Alive” speech; and one individual will throw the ceremonial first pitch.

Additionally, on Monday, June 13, the D-backs will host Greg Hague/Founder of 72SOLD for a memorable ceremonial first pitch.

The D-backs will host, as a guest of Cox, Phoenix’s own Asher Angel, an actor with work on Disney Channel’s “Andi Mack” and in DC Comics’ “Shazam!,” to throw the ceremonial first pitch on Wednesday, June 15.

Hunger Awareness Night will be the focus on Friday, June 17, as the D-backs team up with Arizona Milk Producers and Kellogg’s encouraging fans to donate 3 or more boxes of cereal at a tent on the plaza or make a monetary $10 donation towards milk purchases to be given to St. Vincent De Paul, Mom’s Pantry and United Food Bank.

The D-backs’ Juneteenth Celebration on Saturday, June 18, will honor the local Black community with a series of exciting elements (details shared in a separate news release).

Dads and father figures will be celebrated on Father’s Day on Sunday, June 19, with the first 15,000 dads to receive a Hawaiian Shirt courtesy of Cox. ABC 15 contest winners will take the field with the players pregame. All kids and dads in attendance are invited down to the field postgame to run the bases (details shared in a separate news release).

Pride Night, supported by Vizzy Hard Seltzer, will be hosted on Saturday, June 25, with the first 15,000 fans receiving a Pride Tee and fans being treated to various activation elements (details shared in a separate news release).

Get your tickets here.