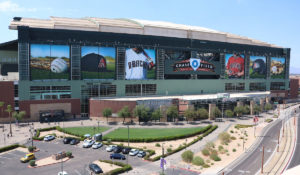 The Arizona Diamondbacks will celebrate the Latino community during the 24th annual Hispanic Heritage Weekend, presented by Estrella Jalisco and supported by Cox, Honeywell, Arizona Milk Producers and APS, this Friday-Sunday at Chase Field. This will be the second straight year the event has included 3 days of festivities with each game highlighting different cultures and groups, such as the Caribbean, Central America and Mexico.

The highly anticipated Serpientes Replica Jersey, courtesy of Pepsi, will be given to the first 10,000 fans on Saturday.

Fans interested in attending the D-backs vs. Padres game, scheduled for a 5:10 p.m. first pitch, may purchase tickets at dbacks.com/tickets, by calling 602.514.8400 or in person at the Chase Field Ticket Office.