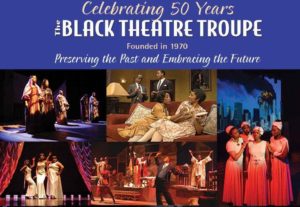 The Black Theatre Troupe’s 2020-2021 season Telling Our Stories will mark the 50th year the company has celebrated the Black experience.

Since their 1970 debut production of Lonnie Elder’s nationally acclaimed drama of social and political consciousness, Ceremonies in Dark Old Men, Black Theatre Troupe has gone on to produce powerful works with an emphasis on African American culture and ideology. In addition to being featured at several of the National Black Theatre Festival celebrations in North Carolina, Black Theatre Troupe was honored with that national organization’s 2013 Longevity Award and recognized as one of the longest continuously operating Black theatre companies in the United States. The company also thrust Phoenix’s arts communities into the national spotlight by being recognized as one of the few companies in the country that have completed the performance of August Wilson’s entire 10 play Pittsburgh Cycle, which chronicles Black life in America for each decade of the 20th Century.

“This milestone of turning 50 stands as an affirmation of our company and the power of sharing stories that illuminate the Black experience,” says Black Theatre Troupe Executive Director David Hemphill.

“Fifty years ago, we were able to show the power of art to help us find ourselves and each other,” he continues. “Now, the fires from which we were forged are again raging across the country. Just as it has been for the last 50 years, today’s challenges and uncertainties demand critical new strategies and programs that must involve and continue to serve the community. To that end, we are committed to do what we have done so well over these many years: tell stories that preserve the power of our past and embrace the possibilities of our future.”

“In 1970 the Black Theatre Troupe was born as a result of the same energy that is sweeping across the nation today. We have always been here to give voice to the Black experience And we will continue to do so. Let your voice be heard!” – Executive Director David Hemphill.

Tax deductible contributions can be made to Black Theatre Troupe.

Black Theatre Troupe’s 2020/21 Season will include Sistas: The Musical, Sunset Baby, Black Nativity, A Soldier’s Play and Ain’t Misbehavin’. The performance schedule will be announced at a later date.

Throughout the 50th Anniversary celebratory season, the company will be sharing photos, videos and memorabilia from its archives that reflect its great past as well as highlight its aspirations for the next 50 years. Black Theatre Troupe invites the community to share memories and images as well as participate in conversations through social media by using the hashtags #BTT50yearsAZ and #blacktheatretroupe.

At the beginning of the long hot summer of 1970, a City of Phoenix Parks and Recreation Supervisor named Helen Katherine Mason noticed the distinct absence of one rich and resonant voice within the arts communities of the Southwest, the Valley and the State of Arizona at large. She dedicated herself to giving that voice a platform from which it could be lifted and heard by all.

From that simple dream, The Black Theatre Troupe, Inc. was born and is now a nationally celebrated company.

During its fledgling years the company performed in several city facilities before getting its first home in 1976. One of the most important facilities that the City of Phoenix provided during those times was a meeting room at Eastlake Park in downtown Phoenix. Eastlake Park has served the inhabitants of Phoenix since the late 1880’s. Originally known as Patton’s Park, it was developed by the Phoenix Railway Company to serve as a transfer point for the white patrons of the city’s trolley system. The park eventually became a recreational place where people of all races could meet to relax and celebrate special events without violating separatist laws which existed in the nation and state during the first half of the 20th century. After moving from that community room at Eastlake Park the company used various locations in the City, until 1983 when they purchased the historic Temple Beth Hebrew Synagogue in downtown Phoenix, in the heart of what is now the Roosevelt Row District. After an electrical fire in 2001 the company again used multiple facilities.

In 2006 a City of Phoenix Bond Election awarded the company $2.5 million for a new home. On February 1, 2013, after a long and successful capital campaign to raise additional funds, BTT celebrated the opening of their new home, The Helen K. Mason Performing Arts Center. This new state of the art facility is located at Washington and 14th Streets in downtown Phoenix – exactly two blocks from where it all began: the historic Eastlake Park.