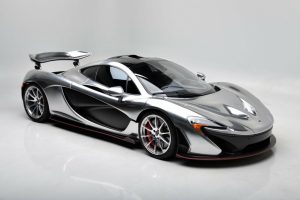 Barrett-Jackson, The World’s Greatest Collector Car Auctions, will feature The Northside Customs Collection, a select group of original American muscle, Resto-Mods, and late-model cars and trucks that will be offered with No Reserve during the annual Scottsdale Auction at WestWorld of Scottsdale, January 21-29, 2023.

“Over the years our Scottsdale Auction has offered some of the world’s finest collections sold almost entirely with No Reserve,” said Craig Jackson, chairman and CEO of Barrett-Jackson. “The Northside Customs Collection is a coveted group of meticulously restored and preserved domestic collectible vehicles. This collection is eclectic as it is rare and features several spectacular examples of proper American muscle.”

“The attention and care that was invested in the vehicles being offered from The Northside Customs Collection is extraordinary,” said Steve Davis, president of Barrett-Jackson. “It’s an incredibly well-preserved and well-documented offering made up of entirely American automakers and they’re all selling with No Reserve.”

Those interested in registering to bid on these exceptional vehicles from The Northside Customs Collection and the entire 2023 Scottsdale Auction docket may do so here.