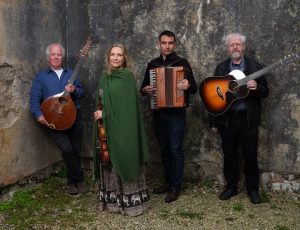 With a Celtic spirit culled from the rich musical traditions of their native County Donegal, Altan will perform on Nov. 20 at Scottsdale Center for the Performing Arts with supporting act Clare Friel.

Formed in County Donegal in 1987 by lead vocalist Mairéad Ní Mhaonaigh and her husband, the late Frankie Kennedy, Altan has had an unwavering commitment to bring the beauty of traditional music, particularly that of Donegal fiddlers and singers, to contemporary audiences in a way that shines a unique light on its qualities.

The members of Altan have kept their promise by traveling with Irish presidents on state visits to Japan, North Korea and Italy. And in 2006, the Irish government honored Altan with an official postal stamp to celebrate the group’s contribution to the Irish culture.

“If Dolly Parton calls them ‘the best traditional Irish band,’ then you know they are exceptional,” said Abbey Messmer, programming director for Scottsdale Center for the Performing Arts. “We are thrilled to finally have Altan in our space with special guest fiddler Clare Friel, and we hope folks are also able to attend the pre-show encounter with Altan members as they talk about Donegal fiddle styles.”

The band’s latest album, “The Gap of Dreams,” celebrates the roots of its music in Donegal folklore. The title refers to that “gap” between this and the “other world,” which older fiddlers noted as the source for their music and inspiration, poetically describing encounters with the fairy folk or listening to tunes on the wind. In creativity, the “gap of dreams” is never shut.

Before the show, Altan will be hosting a pre-show lecture about the history of Donegal music and Donegal fiddle style. The lecture begins at 6 p.m. and is free to the public. RSVP is requested.

Opening for Altan is Glasgow native Clare Friel. Friel is one of the members of The Friel Sisters, an Irish music group consisting of Friel and her two sisters. In 2018, the Irish television station TG4 named Friel the TG4 Gradam Ceoil Ceoiltóir Óg/Young Musician of the Year and described her as “one of the most exciting young traditional musicians on the scene today.”

Audience members can experience the beauty of County Donegal, Ireland, on Sunday, Nov. 20 at 7:30 p.m., at Scottsdale Center for the Performing Arts, 7380 E. 2nd St., Scottsdale, Arizona. Tickets for each performance start at $40.

Scottsdale Arts is continually striving to increase our accessibility offerings to provide enriching arts opportunities for everyone in the community. Find more information about services we offer, here.