What Does Phoenix’s Growth Mean for Business?

In this fastest-growing of U.S. metropolises, legal issues need to keep pace with innovation in business

by Eric Johnson and Jon Howard 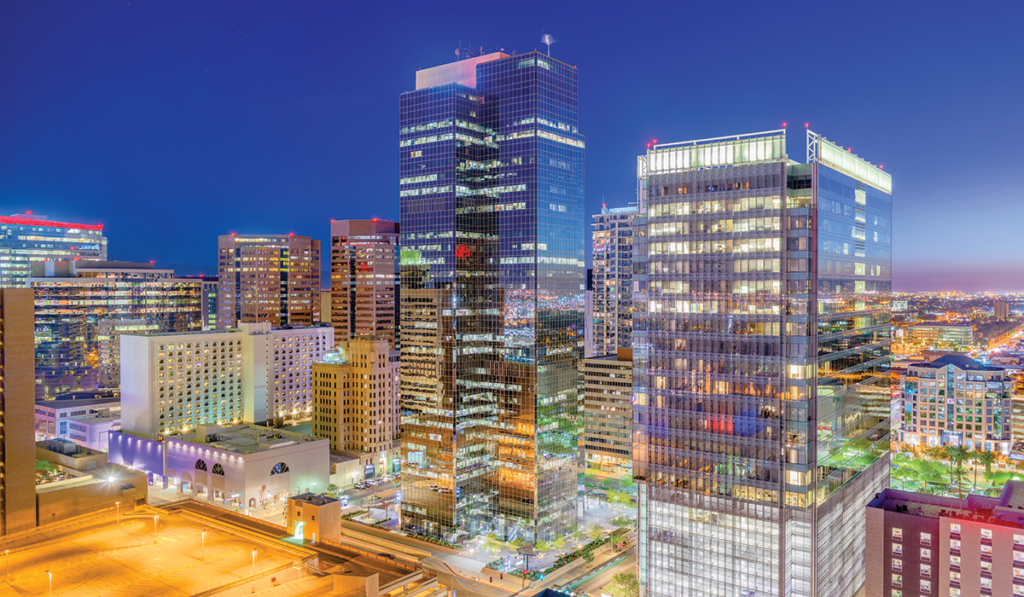 Being one of the fastest growing cities in the country has helped Phoenix gain not only new residents but also an unprecedented level of new investment, startups and M&A activity.

The influx of young professionals and the increase in successful exits within the technology sector creates an ideal environment for startup growth. Much like a self-sustaining ecosystem, former founders who have successfully exited from a company are able to use the funds to reinvest in new companies. Additionally, an expanding population provides both the need and the brainpower to innovate and form new startups. Phoenix has already seen successful startups in the healthcare, real estate and technology sectors, all of which are areas that will continue to be in high demand.

The legal community continues to serve an important role in structuring these new companies and facilitating investments. Additionally, because of the innovative nature of startups, law firms will help such companies develop their products and services, protect their intellectual property and operate in a compliant manner (especially in highly regulated industries such as healthcare, banking and vehicle manufacturing). This means legal professionals will be on the forefront of groundbreaking questions such as the regulation of autonomous vehicles, the further adoption of telemedicine and how to further ensure data privacy. As new technology is developed and the state and local governments continue to support policies that promote growth and innovation, the Phoenix area will expand its growth as a specialized legal market with the opportunity to drive the national discussion on many important issues.

The same factors that drive startup expansion also boost the volume of M&A deals. As the population grows and valuations increase, the incentives to sell also increase. As a result, there will likely be a higher volume of sales of homegrown Phoenix companies. The money these transactions bring to Phoenix will provide the opportunity to reinvest, which will increase the volume of future deals. Lawyers facilitating these transactions will continue to see not only a surge in the volume of the work, but also an increase in the size and sophistication of the transactions. In this climate, not only is the temperature hot; the deals are, too!

The significant migration of individuals to Phoenix and their addition to the labor market also creates opportunities as well as potential pitfalls for employers. Indeed, one might reasonably conclude that this would lead to an increase in job competition without a need for significantly raising wages. However, despite this influx, many Phoenix employers remain desperate to fill vacant positions, and this results in applicants/employees gaining leverage when negotiating wages or other employment terms and conditions. Notably, many new Arizona residents are coming from states like California, where there are a multitude of pro-employee rights and/or privileges that are not required in Arizona. As a result, some employers are proactively adopting more favorable employment policies in order to attract or retain top talent.

While some businesses are struggling to find employees, as noted above, others are flourishing (such as those in the technology sector). For new or small employers experiencing rapid growth, there are a number of legal considerations to keep in mind. For instance, does the increase in the number of employees trigger any federal or state laws such as the Family and Medical Act, which applies to any employer with 50 or more employees within a 75 mile radius? Also, does it make sense for employees to execute non-competition or other restrictive covenants in order to safeguard the company’s confidential information and other legitimate protectable interests? Should an employee handbook be created or updated? The answers to these questions will vary by the employer, but they are questions that all businesses should at least be asking themselves and/or their legal counsel.

Though growing businesses should consider various employment-related issues as they grow, they would also be well advised to prepare for another downturn in business should the Delta or some other variant rampage across the country again. Employers subject to the Worker Adjustment and Retraining Notification Act (WARN) must comply with various regulations when laying off a significant number of employees. While employers were given some relief from WARN when the pandemic hit in 2020, as it was so unexpected, such slack might not be given in the future as employers are now aware of the possibility that they may have to lay off a number of employees quickly should another pandemic persist.

Did You Know: According to the newly released census numbers, Phoenix is the fastest-growing city among America’s biggest metropolises: The population grew from 1.4 million people in 2010 to 1.6 million in 2020, a rate of 11.2%.