Suzette Smith: The Future Is Fermented 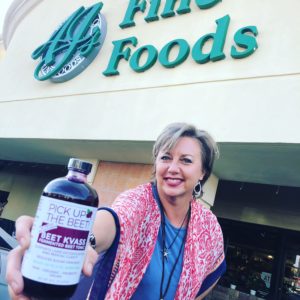 Growing up on a farm in rural Georgia, Suzette Smith learned the great art of garden-to-table cooking at an early age. Her parents were modern-day pioneers who left the city and moved the family to the country. Smith harvested the garden, which was the foundation for her passion of whole food nutrition. From soil to seed, she has stuck to the basics when it comes to food and believes in natural healing. Now an entrepreneur and a passionate advocate for nutrient-dense foods, this small-town girl’s fermented foods recipes have landed her in some big-name stores across the Valley.

Smith’s obsession with gut health has been strong for more than a decade. Through years of training to sell supplements, she learned the gut is “grand central station” for the foundation of one’s health. Vitamins weren’t enough. “You can’t supplement your way out of a bad diet,” Smith says. She needed something she could sink her teeth into, literally.

More than five years ago, Smith found a website about fermented foods and sauerkraut. Intrigued, she shredded her first head of cabbage, jarred it with some brine and placed it in the closet. After stinking up the entire neighborhood, the delicious pickled cabbage she created became her go-to sauerkraut recipe and she was on a mission to create gut-healthy food that would make a difference in the lives of her closest compadres. “It was a difference they could feel and taste,” Smith says. “When friends kept asking for more, I decided to make a move. I had hit a brick wall with supplement sales, and fermented foods ignited a passion inside of me.”

With a solid kraut recipe, Smith turned to a friend who had a little money in her pocket. Together, they founded Garden Goddess, Phoenix’s only fermented food company. “However, my friend quickly realized shredding 80 pounds of cabbage by hand and standing at a farmers market on Saturday was not her cup of tea,” Smith relates. “So, I paid off my part of the accrued debt and kept hustling.” 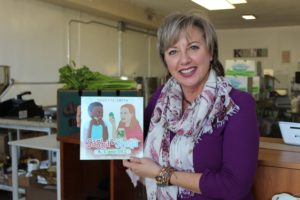 Not paying herself was one of several obstacles Smith had to overcome. She found producing her product in shared kitchens was a challenge because it was expensive, and heat posed a problem to her products. Her ferments prefer a solid 68 degrees. So, Smith decided to build her own fermentation kitchen with no heat and a cool temperature. “As you can imagine, my space is absolutely delightful in during the summer,” Smith jokes.

With her entrepreneurial spirit and love to share, Smith decided to open her space to small food companies at less than market rents, because she was there once, and rents can kill the bottom line.

Smith was able to start paying herself two years ago, thanks to a loyal tribe of customers from the farmers markets who experienced great results from just one tablespoon a day of her kraut. During this time, she’s also grown the most as an entrepreneur. “I’ve learned to hire quality labor and not try and save every soul that walked through the door,” Smith says. And she’s dealt with the pains of perfecting shipping glass jars and mastered the art of P & L statements as her numbers got larger.

The year 2020 has already proven to be the best year yet after Smith landed a deal with AJ’s Fine Foods and Whole Foods locations in the Valley. She still sets up her stand and offers samples of her products, each with their own personality, one cup at a time. Kowboy Kraut has a Southwestern flair, Power Kraut has a kick of ginger, Apple Kraut is chock full of horseradish without the burn, and Beet Kvass is Phoenix’s only sugar-free, fermented beet tonic that oxygenates the blood, kills fungus and curbs sugar cravings. “In five years, Beet Kvass will be a household name,” Smith predicts.

Smith is sure there will be more times when she wants to throw in the cabbage, but she will continue to expand her palate thanks to passion and perseverance. Next on her long, organic grocery list? Teaching kids the importance of gut health and how to ferment their own foods at home, in her children’s book titled Sasha and Sheila – B, C & Dill.

“I’ll always be dedicated to the daily grind of building my brand by picking up the beet and keeping the kraut moving,” Smith says.

Pick Up the Beet