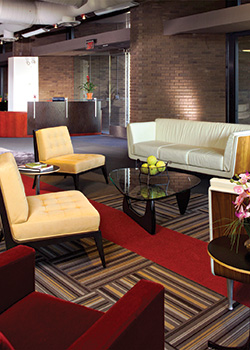 The older Goodman had seen Arizona weather several economic downturns since their Phoenix-based furniture store opened its doors in 1954. Today, Goodmans is one of the largest office furniture dealers in the Southwest and one of the top three largest Herman Miller dealers in the world. And, for a business tied so closely to real estate cycles, Goodmans has had its share of ups and downs.

According to the Business Cycle Dating Committee of the National Bureau of Economic Research, the U.S. economy experienced 10 recessions from 1946 through 2006, each lasting from six to 16 months. The 2007-2009 recession was the longest in the postwar period at 18 months.

“We’ve worked hard to diversify our customer base so that we don’t feel the hit as hard,” Adam Goodman, the firm’s president, says. “We focus on four distinct markets: commercial offices, healthcare, government and education.”

Goodman is especially proud of his company’s novel approach to investing in its employees during a down economy. “While we may cut our spending, we don’t cut on what we’re spending on our people. We want our employees to be engaged and satisfied with their jobs. They should not be worried about benefit cuts or furloughs,” he says.

Even when it seemed like there was no end in sight, Goodmans was vigilant about doing wage surveys and gave raises to some employees whose wages were low by industry standards. “We don’t want to take advantage of our employees at any time,” he says. “Our mission is ‘Creating Great Lifetime Furniture Experiences,’ and we can only achieve that by retaining great talent.”

Cactus Flower Florists
Because Arizona’s economy is one of the most volatile in the nation, businesses must adapt accordingly. Eric Luoma, president of Scottsdale-based Cactus Flower Florists, says his family’s business has grown and shrunk with the economy since his mother, Sharron, opened their first store in 1972. “We have had as many as eight stores and have moved a few times during weak economies.” But he adds, “We just opened our first location in Chandler eight months ago. We always wanted to have a presence there and took advantage of the good rates.”

Luoma was in high school when the 1980s recession hit. “All of our family members worked for the business. Back then, we had three locations and it was a very trying time,” he recalls. “We talked a lot about our challenges over the kitchen table. We reduced purchases and we had to put our plans for expansion on hold.”

When the Internet came along, the entire floral industry was turned upside down — so much so that Cactus Flower took its $400,000 Yellow Pages budget and devoted it to online marketing efforts through its Website and social media campaigns. “Technology has always been a passion for me,” says Luoma. “We were one of the first floral shops to install a point-of-sales system so we could track purchases and store customer information. We also own FlowerShop.com, a national brand that we developed internally.”

As for social media, Luoma says feedback from Facebook fans and Twitter friends helps the company better determine what the market desires. “They help us vote on our featured designs of the month. Our 2011 calendar was created entirely by our social network.”

“We are very happy that our products were not involved,” Hickman says. “We’ve been very fortunate. Our company has had a pretty good run for these last couple of years. Because we have invested in new machinery, built more egg-laying barns and invested in great middle management, we are picking up new egg business in other states. We are blessed as a company to provide safe, affordable protein to customers throughout the Southwest.”

Like Goodman and Luoma, Hickman and his family have learned valuable lessons from past economic downturns. “My grandmother started our business in 1944, so we’ve weathered quite a few recessions, as well as numerous downturns affecting egg prices,” Hickman says. “Because we are a family business, we relate everything to the business as most people relate to a family budget. We have undergone so much ‘belt tightening,’ that the spaces for holes are now more numerous than the leather itself.

“The old saying, ‘Well, no matter what … people still gotta eat’ is now part of our corporate mantra.”

The economic downturn of the 1980s almost swept Hickman’s out of business. “Anytime any of our family members want to be cheered up, we take a look at our balance sheet from 1983 and wonder how we made it through. It still drips red ink,” Hickman relates. Today, Hickman’s Family Farms is a proud charter member of Local First Arizona with more than 200 employees.

“With the exception of my oldest brother who is a biochemist in San Diego, all of our family works in the business. My brother Glenn is president; my brother Billy is vice president of operations; and my sister, Sharman, is in charge of public relations,” says Hickman. “Nephews and nieces work during their school breaks in various capacities, and my parents, Bill and Gertie,” he concludes with a smile, “come in every day to tell us what we are doing wrong.”

Despite national news that Arizona is slow to recover from the most recent recession, Hickman, Goodman and Luoma are optimistic.

Hickman believes those who place value on relationships will come out the strongest when the economy bounces back. “We’re all in this together. One of the best things you can do is to network and continue to build your relationships with customers from top down.”

Goodman and Luoma report revenues are down 40 percent since their peak years, but both are seeing positive signs that business is picking up. “People are spending more,” Luoma says. “Perhaps not like 2006, but people need flowers in their lives, and values are better now than ever before.”

And Goodman says his company has seen an upward peak in business for four consecutive periods. “We’ve always been good about forecasting our next 90 days, and our current forecast took the biggest jump in one period in the past two years. I’m not ready to call it a trend, but we’re keeping our eye on the horizon,” he says, adding, “We’re not going to let a dip in the economy keep us from achieving our long-term goals.”